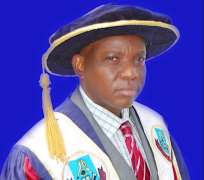 The Vice-Chancellor issued the rebuttal at a press conference at the main campus of the university in Ekpoma.

He described the reports as “wicked, malicious, and outright falsehood”.

He emphasized that he did not at any time grant interview to any journalist on the issue.

Onimawo said, “We have started an investigation into the publication, and the matter has been reported to the DSS (Department of State Service), police, and we have also reported the matter to other agencies of government to find out the root of the matter.

“It took me by surprise that somebody could quote the Vice-Chancellor of AAU as saying that the certificate of the visitor to the university is fake. The executive governor, His Excellency, Governor Godwin Obaseki is distinguished Alumnus of the University of Ibadan.

“In fact, in 2018 the University of Ibadan Alumni Association chose him as the distinguished Alumni lecturer, and I accompanied him to Ibadan to that event. So, how can I turn around to say that the same governor was now asking me to make him belong to the alumni association.”