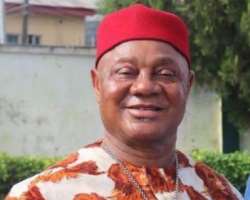 According to report, Chief Nwachukwu died in the early hours of Thursday.

Before his death, Chief Nwachukwu was a former chairman Osisioma Ngwa local government Abia state , and a former Commissioner for Works in the state

A source who spoke with ABN TV said prior to his death, Chief Allen was not sick.

He was the apex Leader of the Peoples Democratic Party in Osisioma Ngwa Local Government Area of Abia State . a