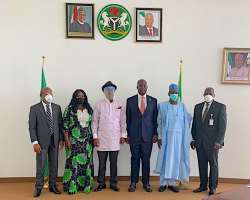 He stated that accomplishing the lofty goals of the roadmap would enable the domestication of petroleum refining, domiciliation of manufacturing of industry requirements, extraction of value from gas, and positioning Nigerian operators and service providers at the fore-front of play in the upstream, midstream, and downstream sectors of the industry.

The Minister who will serve as the Chairman of the Governing Council, with the Executive Secretary of NCDMB, Engr. Simbi Kesiye Wabote as Secretary, enjoined other members to ensure that the targets set in the roadmap are met by supporting the ongoing initiatives and laying the foundation for the upcoming projects during their four tenure.

Returning members of the council include Mr. Mina Oforiokuma representing the Nigerian Content Consultative Forum (NCCF) and Engr. Abdul Kashim Ali, representing the Council for the Regulation of Engineering in Nigeria (COREN).

The Minister commended NCDMB for the monumental strides it had made to deepen the practice of Nigerian Content in the Nigerian Oil and Gas Industry since its establishment in 2010.

Some of the evidence is that unlike before when we had just a few companies, there are currently more than 8,000 service providers and more than 60 operating companies registered on the NCDMB JQS portal, he noted.

Other achievements include the establishment of two world-class pipe mills and five impressive pipe coating yards and establishment of four active dry docking facilities in Port Harcourt, Onne and Lagos.

Providing further statistics, the Minister said that ”before 2010, only three percent of marine vessels were Nigerian owned, but today, Nigerians control and own over 40 percent of vessels that are used in the oil and gas industry. In the area of fabrication, Nigeria can handle fabrication of more than 60,000 tonnes per year with its array of world-class fabrication yards.”

He also expressed delight over the growth of a large number of successful indigenous operators which now account for more than 15 percent of our oil production and 60 percent of our domestic gas production, with infrastructure in place for integration of FPSO in-country.

“The delivery of substantial elements of the TOTAL Egina project and the integration of 6 modules in the country are as a result of Local Content intervention,” he added.

Sylva also hailed NCDMB for the completion of its new headquarters building, complete with 1,000-seater auditorium and 4-level car park. The headquarters building has over 30,000 square meters of ground floor area within the main building that can comfortably accommodate 1,000 workstations, he added.

He identified the construction of oil and gas parks in Bayelsa and Cross River States as another major achievement of NCDMB, noting that each park is expected to create more than 2,000 direct jobs when completed. The parks are meant to enhance local manufacturing by providing power and other infrastructure to enhance Ease of Doing Business and creation of employment, he explained.

The Minister also commended NCDMB’s Investment Policy, which is driving the prudent utilization of the Nigerian Content Development Fund for partnerships in Modular refineries, LPG value chain, and other manufacturing and hydrocarbon processing activities.

He announced that the 5,000 Waltersmith Modular Refinery in Ibigwe, Imo State, developed in partnership with NCDMB is ready for commissioning once the current restrictions are lifted.

In his address, the Executive Secretary of NCDMB, Engr. Simbi Kesiye Wabote stated that NCDMB was making history with the inauguration of the first ever female member of the Governing Council.

Dwelling on COVID-19, he said the pandemic has shown that the ability of a country to cater for its people in a safe and secure environment is dependent on its level of self-reliance.

He stressed that “the importance of local content in any nation cannot be over-emphasized and the COVID-19 experience of many nations is an eye-opener.”

Wabote said NCDMB used the occasion of its 10th Year Anniversary to reflect on the events related to the pandemic and what it could do to further deepen our local content practice in the oil and gas industry.

According to him, “our reflection is that we are not fully at our destination but the situation could have been worse if not for the NOGICD Act. We are set and we are looking forward to the next decade of NCDMB with a sense of purpose to deliver on our mandate.”