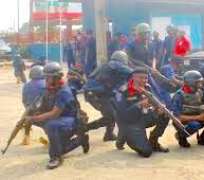 The Chairman of Bakassi Local Government Area, Hon. Iyadim Amboni Iyadim has accused the officials of the Nigeria Security and Civil Defence Corps (NSCDC) of allegedly shooting two youths in the area.

He alleged that some officers of the Corps embarked on a raid without following due protocol.

“The Civil Defence caused the whole problem, they embarked on such an operation and raided the area without informing anybody on ground, it was a very bad operation. However, the situation is under control, we have talked to the warring factions and everything is calm.

The LG boss further called for thorough investigations into the whole crisis.

Speaking with newsmen earlier, the Chairman said he had spoken to the Area Commander of the outfit and had been assured that the two operatives involved in the act have been apprehended and will soon face in-house summary trial before being charged to court.

“In fact, as we speak, the officer and his accomplice have been arrested and will be charged to court next week, we cannot continue to waste the precious lives of our youths because of selfish interests.

“It is high time we correct these ills by dismantling unnecessary roadblocks to check the alarming rate of extortion associated with enforcement agencies.”

While urging the youths not to take laws into their hands, he called on the residents to go about their lawful businesses as other security agencies have been directed to ensure the protection of lives and property.

“On our part, we shall initiate a strategy to check security and soon, we will constitute a vigilante group that will feed us with intelligence to keep the area safe and secure.”

Iyadim also sent his condolences to the family and colleagues of the deceased youths, assuring that such an incident will not repeat itself under his watch

He assured the youths that the perpetrator of the act will be made to face necessary sanctions.

Recently, a clash between motorbike riders and a security outfit resulted in the death of a youth in Ekpri Ikang area of the state.