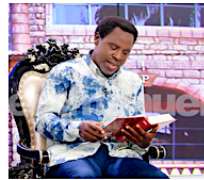 Lagos State Governor Babajide Sanwo-Olu has declared places of worship in Lagos State will remain closed despite the directive by the Federal Government that they should reopen.

The information was made known by Lagos Commissioner for Home Affairs, Anofiu Elegushi, who said the reopening of worship centers in Lagos was not yet possible as the state was the epicenter of the coronavirus pandemic in Nigeria.

The announcement comes several hours after prominent Nigerian Pastor TB Joshua insisted he would only open his Lagos-based church when “he hears from God” to do so.

Joshua, whose church ranks one of the major tourist attractions in Lagos – accounting for six out of every ten visitors to Nigeria - said he received a “revelation” from God about the church’s initial closure.

In a video posted to YouTube , the cleric can be heard forewarning of The Synagogue Church Of All Nations (SCOAN) closure on three occasions – in February 2019, April 2019 and January 2020 – long before the coronavirus outbreak resulted in a ban on public gatherings.

“Viewers, that same God we are waiting to hear from on when to reopen – when things will go back to normal – as usual,” Joshua said in a statement released to his official social media platforms.

“God’s time is the best. We are waiting at His feet for that time. We are tarrying for the Holy Spirit’s instruction,” he continued, calling on his followers to “pray without ceasing”.

“It is God’s work, not our work,” he concluded, adding that he would continue live broadcasts on his Christian television channel Emmanuel TV. “Here, our thanks go to the authorities for understanding. Jesus is Lord!”

On Monday 1st June 2020, President Muhammadu Buhari had announced additional easing of lockdown restrictions in Nigeria, including the reopening of churches and mosques in line with “state government protocols”.

The Lagos State government decision comes as a surprise as reports from last week indicated Sanwo-Olu was preparing to reopen places of worship with guidelines such as social distancing expected to be adopted and a taskforce sent to ensure compliance.

Several Nigerian blogs inferred Sanwo-Olu's decision was influenced by the prominent cleric's position, especially since pictures surfaced of the Lagos State Governor visiting Joshua in the run up to his successful election.

Tawia Acheampong is a writer usually based in Accra, Ghana