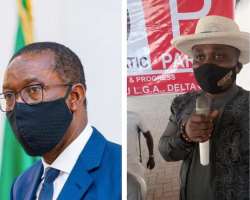 Applauds have continued to pour in following the unprecedented development across the nooks and crannies under the incumbent administration in Delta State.

Chairman, Udu local government area, Chief Jite Brown, has felicitated with the State Governor, Senator (Dr.) Ifeanyi Okowa, on the occasion of his 5th anniversary as Chief Executive of Delta State, as the nation marks the handing over day.

The council boss who could not hide his feelings over the noticeable achievements of the Okowa-led administration in the last five years, said he was glad to be associate with the government that had impacted positively on the lives of Deltans through its various employment programs and giant developmental strides.

Chief Brown made the mind-blowing remarks in his goodwill message to mark the democracy day, pointed out that Governor Okowa had in the last five years proven to be a detrabalized Deltan with the consideration of all the ethnic groups in the state in his development programs.

Hear him: "the last five years of governance in Delta state has clearly demonstrated that Governor Okowa is truly a democrat raised by God to come and deliver the dividends of democracy to some major parts of the state, in order to bring a new lease of life to the neglected people of those communities".

Chief Brown who restated the unwavering support of the people of Udu kingdom to the successes of the Okowa's administration, said it was based on this commitment to the Peoples'Democratic Party (PDP)-led government that has made Udu to remain peaceful and open to more development.

The Chairman assured his people of better days ahead of them with the present Okowa's administration and appealed to them to them to remain steadfast with their support for the government of the day.