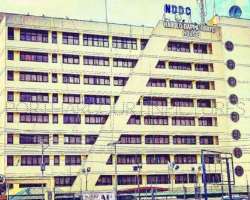 The headquarters of the Niger Delta Development Commission in Port Harcourt, Rivers State has been ordered shut down.

The order, contained in an internal memo, came just a few hours after the death of the Commission’s Acting Director of Finance, Chief Ibanga Bassey Etang, fuelling suspicion that he may have died from Coronavirus Disease.

That suspicion also becomes more intense considering the fact that Etang was taken to the isolation area for COVID-19 patients at the Braithwaite Hospital in Port Harcourt after he died.

The closure of the NDDC office was made known in the internal memo dated May 28, 2020.

The staff were also told to isolate for two weeks.
According to the internal memo, signed on behalf of the Management by Silas Anyanwu: “I am directed to inform all staff that Management has approved that the Commission should be shut down for Two weeks starting from today 28th of May, 2020.

“Consequently, all activities in the Commission including ongoing matters are hereby shutdown for the time being.”

The memo went on to give other directives, including the one to the Head Security, asking him to ensure the “safety and security” of the Commission.

It asked the staff to wait for further directive as they self-isolate.