“Breaking: Buhari’s Minister, another appointee at ‘war’ over office space” by Blueprint Newspaper of May 24, 2020: A case for the Study of National Psychosis and the Need for a Volunteer National Psychologist-at-large 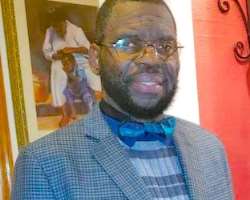 The entire world, within the last 24 hours especially, is witnessing the open and unhelpful institutional horrible fights among federal government officials which is being seen in the media.

This is happening under the presidency of President Muhammadu Buhari who during his first position as the Nigeria’s military ruler in 1983 once launched what he rightly called “war against indiscipline” in the country.

In 2016, the Foreign Policy Newspaper, a Global Magazine of News and Ideas, in its edition of September 8, reminded the world that President Muhammadu has again renewed the “campaign to improve behavior in Nigeria”.

The Foreign Policy Newspaper, specifically pointed out that the Federal Ministry of Information and Culture , tweeted Buhari’s remarks calling for “attitudinal changes” and the “electronic, print, and social media” “to encourage better behavior at every rank in the Nigerian government and in the general public”.

President Buhari as part of his national communication to all Nigerians emphatically asserted that “The long-cherished and time-honored, time-tested virtues of honesty, integrity, hard work, punctuality, good neighborliness, and patriotism have given way …to dishonesty, intolerance, indolence, unbridled corruption, and widespread impunity”.

The President, VP Yemi Osinbajor, CoS Prof Ibrahim Gambari will agree that the currently streaming reports of war over non private office spaces at a government building in Abuja, functionally speaking, goes against the human and institutional values, attitudes and tolerance the President called for in the past and continued to call for in regards for all citizens to practice proper conduct for the good of the nation.

President Buhari, Sir this is not about who is right in regard to the war of words between Chairman of Nigerians in Diaspora Commission (NIDCOM), Abike Dabiri-Erewa, and the Minister of Communication and Digital Economy, Isa Pantami.

What is now in display before the taxpayers who are the main owner of the property and in front of the entire world is the institutional bitter fight, a painful embarrassment to the Nigerian government and its people.

Mr. President, the entire world, on live video could see affected government staff standing helplessly because they did not have an office space to occupy and do government work. Mr. President, no one denied the report that the staff did not have access to their working equipment which was reportedly locked up in the building.

As was also reported the office space which was not only made forcibly vacant, contains multiple office essentials like computers and printers. There are reports that police officials and their tight time were misused in the institutional evacuation. Mr. President we cannot continue like this.

Mr. President, no matter what each side alleges, how does the reported forceful eviction of government staff, the reported misuse of security officials, and the temporal denial of the use of government equipment, serve the interest of the collective works of the government? Mr. President, cyclical institutional implicit misbehaviors as mentioned here could support the need to study the effects of what could be called National Psychosis as it relates to Nigeria especially?

What is most baffling in this official nightmare is that this two government instruments, the Nigerian Diaspora Commission (NIDCOM) and the Federal Ministry of Communication and Digital Economy should be in a happy marriage in terms of external and internal communications, instead, they are at war institutionally.

The Minister of Communication should in fact be officially courting the Nigerian Diaspora Commission chief, who for more than a decade is focused on diaspora ideas and people who can help vigorously drive the digitization of the Nigeria economy.

I hope this recommended idea happens soon as Nigeria is not about personalization but purely about the people and national development. The government environment and its officials must be about the practice of a system of free and fair relationship to each other, at all levels and without fear, intimidation, or favor.

Collectively both should be about focusing on strategic communication, intellectual capital, knowledge economy, and downloading diaspora entrepreneurial brains and transferring them to assist in developing and expanding our economy.

Some other lessons which could be learned by the Nigerian government as it relates to workspace allocation, is that, globally the practice of shared office space or coworking spaces is increasingly common as it helps manage slim government monies in a resourceful manner.

In our current state of hardships due to the COVID-19, fighting over office space should be the last thing in the mind of all of us. If common sense is well applied to this matter the affected agency should be allowed to return to the office space or any other adequate workspace to enable the work of the government to continue functionally.

Prof John Egbeazien Oshodi, was born in Uromi, Edo State, Nigeria. He is an American based forensic/legal/clinical psychologist and a scholar in Psychological science and management with a focus on the psychology of emerging societies and democracies. A Self-appointed virtual volunteer National Psychologist-at-large for Africa based multi layered societies especially those with self-inflicted, cyclic, and transitioning challenges, like Nigeria. Founder of psychoafricalytic psychology. [email protected]