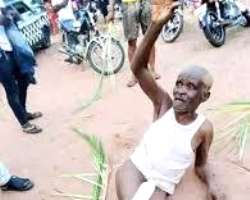 On May 5, an associate of the Advocacy for Alleged Witches (AFAW) drew attention to the case of a man who was accused of ‘holding’ the destinies of people in the community, Ugbelle. Ugbelle is in Ideato South (not Ideato North as earlier reported) in Orlu, Imo state. The man was alleged to have engaged in some occult activities that had hampered the progress and development of people in the community. A photo that was circulating on social media showed an elderly man, probably in his seventies surrounded by a charging mob. At this period of a lockdown and uncertainties over the coronavirus pandemic, such allegations are expected and are usually ways that people make sense of their stressful living conditions and existential anxieties. AFAW highlights misinformation regarding the management of the pandemic and other diseases.

I called the Commissioner of Police (CP) and the Police Public Relations Officer (PPRO) in Owerri, the state capital, to notify them about the incident. The CP did not pick the call but the PPRO did. He promised to pass the information on to the Divisional Police Officer in the area for necessary actions. I later contacted an associate of AFAW, Barr. Chimah, who is a lawyer in Owerri to advise on petitioning the CP. But he noted that for a petition to be effective, the names of the man and those who assaulted him were needed. These pieces of information were not available at that point. I contacted one Chidimma Greenpop, the lady from whose page the photo was forwarded to me, to know if she could get me more details. She promised to get some information on the matter but I never heard from her. After a couple of days. I tried reaching out to NGOs in Owerri without success.

There is a ban on interstate travel due to coronavirus. So getting a contact person in Owerri or Orlu, or Ideato would help understand the case of the man and the necessary interventions.

After efforts to reach local NGOs or activists yielded no useful result, I contacted a former colleague who is a catholic priest, Fr Cosmos Udogu. I messaged him via Facebook and he responded. I explained the situation to him and he gave me the contact of a priest at Ugbelle, Fr Kingsley Emejuru. For a while I was worried and hoped that Fr Emejuru was not the charismatic, holy-ghost-fire type and that his activities were not connected with the ordeal of the man. I called Fr Emejuru and he confirmed the incident. He agreed to assist in tracking down the man. He assured me that the alleged 'destiny thief’ was alive; that they did not kill him. I was relieved to hear this. He promised to reach the Chief (Eze) of the Ugbelle community for more information on the whereabouts of the man, his relatives, and revert. The next day, I rang up Fr Emejuru and he said that he had some information about the man. He informed me that the man’s name was Mr. Tobias Nlebedum. He is from Umuonyiri in Ugbelle community in Ideato South, (not Ideato North as reported on Facebook). The man has two daughters. One teaches at a secondary school in Ugbelle. He told me that the man was banished from the Ugbelle community because of the atrocities they claimed that he committed. The man fled to the neighbor village, Ogboko (the village of the former governor of Imo state and now a senator representing Orlu zone, Rochas Okorocha). I asked him to connect me to the daughter or to a rationally minded (he chuckled when I said this) and responsible relative whom I could work with to help support Mr. Nlebedum.

She told me that the father used to come to her place (her maternal home) to collect some food; that she could not accommodate him. If she tried doing that the community members would banish her too. According to her, the parents' marriage was short-lived. The mother separated from her father when she was very young. The mother returned to live with her family in Mgbee. She lived there until she died on August 26 1999. The daughter said that her father lived for so many years in Nsukka where he worked as a farmer. And returned to his native village a few years ago. He has lived there until he was accused and banished.

We identified four areas of support for the father- accommodation, feeding, clothing, and medical care. She said that the father was living near a local dispensary where he was receiving treatment for the injuries that he sustained when he was mobbed. The mob hit him with sticks and machetes. He had injuries at the back, on the legs and the head. The daughter suggested that the father be transferred to another village (name withheld) for safety reasons. The local dispensary was not very far from Ugbelle. The daughter noted that if rumors of the allegations against him reached this community, people would drive him and the local dispenser out of the community. AFAW took care of the medical bills of Mr. Nlebedum and facilitated his relocation to a safer place. AFAW will be supporting Mr. Nlebedum in the coming months as he recovers and gets over the trauma of the mob action. I would like to Frs Udogu and Emejuru for the help in getting in touch with the victim and the Humanists International for supporting AFAW's education and intervention programs.

As soon as the ban on interstate transportation is lifted, AFAW associates will visit the Ugbelle community to meet with the Eze, the priest, and other members to discuss the allegations of holding destinies and related beliefs. AFAW will raise the issue of the banishment of Mr. Nlebedum and explore the chances of his returning to the community soon. AFAW will also use the opportunity to stress the fact that the idea of holding or seizing people's destinies is a form of superstition that has no basis in reason, science, or in reality. AFAW plans to maintain contact with Mr. Nlebedum and his Ugbelle community members to ensure that what happened to him does not occur again in the community.

Alert AFAW: Please notify AFAW about any case of witch or demon hunt in your country or community. Inform us about any incident of witch persecution, allegations of snatching people's private organs, demon possession and magically destroying other people's health, estate, future and destiny. Contact AFAW via email: [email protected], Telephone +2349039908664. Facebook: https://web.facebook.com/groups/760341817780783/

Igwe directs the Advocacy for Alleged Witches which campaigns to end witch persecution in Africa. https://advocacyforallegedwitches.law.blog/