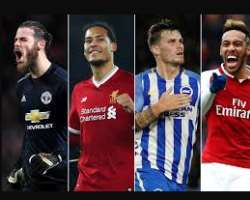 The English Premier League has confirmed that six players playing in the league have tested positive for Covid19.

The six players were among the 748 players and club staff tested on Sunday and Monday. The positive cases came from a six teams with the league not disclosing the identity of the players.

"The Premier League can today confirm that, on Sunday 17 May and Monday 18 May, 748 players and club staff were tested for COVID-19," a statement read.

"Of these, six have tested positive from three clubs."

"The Premier League is providing this aggregated information for the purposes of competition integrity and oversight."

"No specific details as to clubs or individuals will be provided by the Premier League due to legal and operational requirements."

The English Premier has been on suspension since March following the outbreak of Covid19 in the United Kingdom but plans are being made to resume on June 12.

However, with the news cases of Covid19 recorded, the possible resumption of the league might suffer another blow.