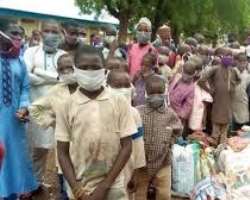 About 2,000 Almajirai pupils who underwent isolation in three quarantine centres in Kano are now ready to be deported to their respective states of origin.

The Kano State Commissioner for Education and Chairman Almajiri Repatriation Committee, Alhaji Sanusi Kiru, disclosed this on Sunday when he led a delegation of women in Da’awah and some civil society organisations who inspected two quarantine centres at Kiru and Karaye respectively.

He said the Almajirai pupils were isolated to ensure that they were in good health before being sent back to their states of origin, pointing out that those from Kano State would be handed over to their parents and guardians.

Kiru maintained that basic social amenities coupled with hygienic feeding was strictly observed in all the three quarantine centres aimed at ensuring that they were in good health condition.

He said northern governor’s had agreed to deport Almajirai pupils to their states of origin with a view to curtailing the spread of COVID-19 pandemic across the affected states.

“We have deported hundreds of Almajirai to many northern states and we have received many from other state governments,” Kiru said.

The commissioner maintained that in the next two to three days, deportation of the quarantined Almajirai pupils would commence.

He noted that those deported from other states to Kano, who were indigenes of the state and interested in the new established Almajirai boarding schools initiated by the Governor Abdullahi Ganduje’s administration would be enrolled.