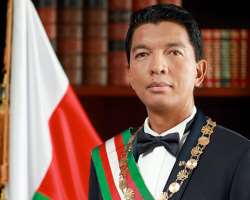 The attention of the Pan-African Unity Movement Against Second Slavery (PANUMASS) has been drawn to credible leaked intelligence about possible murder of the constitutional President of Madagascar, Dr. Andry Rajoelina , for not giving up to his country’s herbal medicinal cure for Corona virus pandemic. From credible intelligence gathering and information available, apart from the assassination of African leaders by enemies of African people, there has also been a hate campaign of destruction meted on African scientists, particularly traditional healers.

The Pan-African Unity Movement Against Second Slavery (PANUMASS) would vigorously condemn any plot this time to destroy an African leader. This deplorable act, to single out the Madagascar leader for assassination, for no crime other than for fighting to save the African population, is condemnable.

This reminds us again about the brutal murder of the Ghanaian internationally renowned herbalist and traditional healer, who invented the cure to the HIVV/AIDS, Nana Kofi Drobo II. He was murdered on 25 August 1992 after his return from Tokyo, Japan. Dr. Drobo was invited to Tokyo by several companies including the Dental and medical University, in order for them to test the efficacy of his drug, which many had claimed cured them of AIDS.

Circumstances surrounding the mysterious death of Dr. Drobo no doubt created the belief that truly, the Ghanaian herbalist was murdered by international drug companies trying to protect their profits because his was the only cure and preventative medicine for AIDS whereas all the others were symptom suppressants.

Another mysterious killing of Africans was that of Eritrean born 33-year old American rapper Nipsey Hussle in April, 2019. This sad event in particular has heightened the tense debate on why African traditional scientists who proclaim to find the cure for malignant diseases, notably AIDS and cancer have to be killed. Nipsey Hussle was in the process of filming a documentary about the infamous 1985 trial of Honduran herbalist Dr Sebi when he was shot six times outside his Marathon Clothing store in the Crenshaw neighbourhood of Los Angeles. In light of his plan to shed light on Dr. Sebi’s trial through the documentary, conspiracy theories have since surfaced about the possible reason behind the Nipsey’s killing, with a number of them claiming that the government assassinated him to thwart his plan.

Popularly known as Dr. Sebi, Alfredo Darrington Bowman was born in Honduras in November 1933. He was well known for his medicinal cure for HIV/AIDS. Dr. Sebo never had formal education, but was trained as a traditional herbalist espousing an African herbalist life.

Dr Sebi was the director of the Usha Herbal Research Institute, and his herbal cure for diseases such as HIV/AIDS, Cancer, Diabetes, Sickle Cell, and Blindness among others proved effective and achieving results. Dr. Sebi had once described his African Bio-Mineral Balance as a dietary program that is consistent with the African genetic structure. The dietary program consists of natural herbal compounds, fresh fruits, vegetables and juices. He believed that mucus was the cause of every disease and that when you eliminate the mucus you eliminate the disease.

In February 1987, Dr. Sebi was arrested and put before court after advertising in the newspapers, including the New York Post, that he had cured thirteen of his patients of AIDS and that he was willing to cure anyone who supposedly had AIDS. He was charged by the Brooklyn Supreme Court in the USA for selling drugs without approval by the Food and Drugs Board (FDA), practising medicine without a license and fraudulently claiming to curee AIDS and other diseases.

In the court case against what some people say were against some of the toughest prosecutors in the USA at the time, Dr. Sebi was asked to bring 1 of every patient he had cured from each of the 9 illnesses he had cured as well as medical records showing that the patients had the disease and another showing the patients had been cured of the disease and confirmed by a second doctor. Dr. Sebi took 77 cured patients and their diagnostic sheets from licensed doctors to the court, instead of the 9 patients he was asked to bring, to prove his case.

He was subsequently found not guilty of the charges against him and discharged. At the time, he was one among a handful of people to have won a case against the United States Supreme Court in about the last 2800 cases. On August 6, 2016, Dr. Sebi died at the age of 82, in Honduran police custody.

Today again, the President of Madagascar Andry Rajoelina is the target for assassination to cover the deception surrounding COVID-19 virus pandemic, and WHO (World Health Organisation) conspiracy to kill millions of Africans. Reports in a Tanzanian newspaper that WHO attempted to bribe President Andry Rajoelina $20 million dollars to poison Madagascar’s medicinal cure for COVID-19 is unfortunate.

There is already a leaked intelligence making the waves, about a big plan to assassinate the Madagascan President in a desperate attempt to destroy the cure for COVID-19. According to the leaked intelligence, WHO is under pressure from big pharmacy companies and governments to stop Madagascar’s herbal cure.

It should be recorded here that WHO first created the alarm for COVID-19 pandemic without investigating its root causes and has been running from one media house to the other claiming that millions of Africans could die from the pandemic. This was re-echoed by United Nations Secretary-General, António Guterres and US billionaire and CEO of Bill and Melinda Gates Foundation, Mr. Bill Gates-the latter even put the figure to at least 10 million Africans could die out of COVID-19 pandemic.

If WHO is genuine, why not attack those who manufactured the pandemics, including HIV/AIDS, EBOLA and now COVID-19 rather than hell-bent on killing an African leader to suit the tastes and designs of big pharmacy companies. No wonder why the US government has been suppressing Cuban medics in an attempt to discredit Cuba’s international medical solidarity. What does WHO to benefit for helping to destroy the leaders of Africa? Believe it or take it, the Madagascar cure is the antidote to eradicate COVID-19 out of the face of the earth. Africans believe in doing a noble service, and not to destroy humankind. WHO should find another area to serve humanity, this time to exert pressure against testing any foreign vaccines on Africans, and if such is necessary let it be done in the country of origin of that vaccine. Period!

In another captioned: “I have a cure for HIV/AIDS-Herbalist” of May 11, 2002, this is what was reported in the Modern Ghana online newspaper” Mr. Kofi Kankam, an herbalist living at Sefwi-Boako in the Western Region, has come out as the latest herbalist to claim to have the cure for AIDS. In announcing himself, Kofi Kankam has dared any health institution that considers his claim to be a hoax to send him 10 AIDS patients, give him just eight weeks and he would prove to the whole world that he has found the key to healing the dreaded disease.

Speaking at his herbal preparation center at Sefwi-Boako, Kankam said his concoctions has been able to cure all AIDS patients that have been brought to him so far and referred to St. John’s Government Hospital at Asafo, also in the Western region, to verify the truth or otherwise. He said most of the AIDS patients who came to him for cure were referred from the hospital, and he claimed when later tests were conducted on them by the same hospital the people tested negative to the HIV/AIDS disease. He even showed a report of a test conducted on a lady who he claimed to have cured her of the disease, after the Noguchi Memorial Institute for Medical Research had confirmed her to be HIV positive on March 12, this year. Kankam asserted all appeals he made to the Ministry of Health (MOH) for more AIDS patients to receive free treatment from his herbal base, as well as his appeal for financial help from Care International, an NGO, had all proved futile.

He, however, appealed to the government; NGOs, philanthropists and private individuals for financial sponsorship, since fees demanded by Noguchi to conduct a thorough test of his medicines and possibly certify them are quite exorbitant. Asked to disclose the source of his medicine, Kankam said it was revealed to him in a dream, and since then he had cured many people, especially from Cote d’Ivoire, with it. In an interview with a laboratory technician of the hospital, he confirmed that it was true most HIV/AIDS patients were referred to the herbalist for treatment, but as to whether they were fully cured, he could not say. Asked about how the supposedly cured patients were faring, the technician said they were all feeling much better than when they were first brought to the hospital. He said some were going about their normal lives. This is about the tenth time an herbalist in Ghana has claimed to have a cure for AIDS. The late Nana Drobo, whose claims, made the most famous claim and confirmations made by his patients drew the attention of the international community and got some Japanese scientists inviting him to their country. The Japanese debunked Nana Drobo’s claim and shortly after his return to Ghana, he died under very mysterious conditions”.

The past five months have seen the relentless efforts employed by President Andry Rajoelina in the global fight against COVID-19, which resulted into successfully making the cure for the pandemic. Faced with the grave challenge of WHO misrepresentation, Madagascar has undertaken a series of action to prevent and cure COVID-19. Africa is proud of this remarkable achievement in the field of healthcare, which places the health of Africans top of other priorities.

The Pan-African Unity Movement Against Second Slavery (PANUMASS) opposes the stance taken by WHO that does everything to misrepresent Madagascar to the outside world. We appreciate President Andry Rajoelina’s commitment to openness and transparency in the fight against COVID-19. The President has invited a number of diplomats, international organizations officials and journalist to Madagascar to witness the effect of his country’s cure for COVID-19.

We welcome the position of African leaders and governments and urge them to be proud of President Andry Rajoelina leadership in the fight against the Corona virus pandemic. Indeed Madagascar is able to discover a cure for COVID-19. The Pan-African Unity Movement Against Second Slavery (PANUMASS) takes this time on the behave of all Africans in extending thanks and appreciation to our brothers and sisters of Madagascar for their endless efforts fighting to save and protect humanity from this deadly COVID-19.

We urge African leaders not to be lured into WHO’s misrepresentation and racist attacks against President Andry Rojoelina. We urge Madagascar not to stop treating people who are suffering from this deadly pandemic. It’s high time Africans extend solidarity with Madagascar in the fight for bringing an end to COVID-19. WHO should understand that the entire Africa and blacks everywhere are behind President Andry Rojoelina, and that no destructive force from outside will come to Africa in harming this great leader. African leaders, through the African Union (AU) should do everything to protect the Madagascan leader from evil people. They have been killing Africa’s great leaders for their stand in bringing developments to the African content. This is the time Africa should stand as one for peace, stability, development and prosperity.