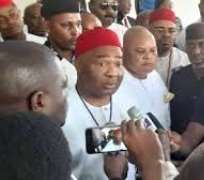 The outcome of the pending Okigwe Zone Senate election will have a lot to say about the 2024 Governorship election in Imo State.

Although the Independent National Electoral Commission INEC has not yet resolved when the contentious Okigwe Zone Senate election will take place, however, Okigwe Zone which hitherto used to be relatively peaceful has turned out to be the problem spot of Imo State politics.

Unfortunately, the 2019 general elections have come and gone but while Owerri and Orlu Zones have since moved on with their lives, and with their Senators at the National Assembly, the same thing cannot be said of Okigwe Senatorial Area.

For long now, Okigwe has literally been without a Senator, as political squabbles and internal communal rancour have kept Okigwe Senate Seat in Abuja vacant.

It all started with Senator Athan Achonu whose mandate was truncated through the Court and Okigwe Zone went back to the drawing board to search for a Senator, which never was.

After a long while, the Senatorial area went back to election ring where Senator Benjamin Uwajumogu of APC later emerged winner, defeating Athan Achonu of Peoples Democratic Party, PDP.

Hardly had Uwajumogu spent some time in the Red Chamber than another round of elections came calling.

This time, Okigwe got enmeshed in chaos, mayhem and confusion never ever witnessed in Imo politics. The Zone became the flash point of Southeast political “Roforofo”.

In the end, INEC returned the incumbent Senator, Benji Uwajumogu. Unfortunately, as he was getting set to settle down for Senate Business, death came calling.

Now this situation has plunged Okigwe Zone back to the starting block of Imo Senatorial elections, when Owerri and Orlu zones had since consolidated in Abuja.

As it stands, according to political pundits, if what Okigwe and Imo electorate saw in the past Senatorial elections in Okigwe Zone shocked their imaginations, this time it will fret their entire body system as predictions indicate that whenever the Okigwe Senate Seat election holds, Imo State will quake to it is very foundation.

The reason is simple. The awaited Okigwe Senate election will be heavily contested for by various factors and camps who would want to not only test the efficacy of their political clout in Imo State, but a testing ground for “who owns the land”

Therefore, whatever be the outcome of the pending Okigwe Senate election will be a prelude to how the next Imo Governorship race will pan out.

Whether anybody likes it or not, the situation in Okigwe Zone will get more volatile than stem down as time goes on.

As at nowmore interested political heavy weights are throwing their Hats into the ring for the dreaded and elusive Senate seat.

Uwajumogu's death has created yet another logjam and uphill task for Okigwe people. If Uwajumogu were to be alive today, Okigwe Zone would not be contemplating of a fresh Senate election, and all sleeping dogs would have been quietly taking their naps.

But now, Lions, Tigers and Leopards are out in the Okigwe zone political jungle. And it is going to be the survival of the fittest.

And with the new model of writing results in your bed room, and heading to Abuja for the “Highest bidder” settlement, the Okigwe situation obviously looks dicey and Ominous.

However, should the likes of Senator Ifeanyi Araraume decide to join the fray, the entire scenario will change, because his entrance would wake up a lot of interests, which will include those who will try to stop him and those who will support him.

But from all indications, if Araraume decides to join the race, his friend and “short-term” political ally, and the Governor of Imo State, Senator Hope Uzodinma certainly will not back an Araraume Horse.

The hand writings are already written clear on the wall. For starters, Uzodinma would not want another political Horse Power in Imo State that may challenge his Kingdom. If the Governor does not even bother about such, his political Advisers, who are all know in political Hawks would talk him into being the only Cock the crows in Imo State.

And if Araraume is determined to return to Abuja as an Imo Senator and Uzodinma stands as a spoil spot, that is where the Table would be shaken vigorious.

Already, Uzodinma has shown that he is not a political fan of Araraume, and he is doing everything possible to clip Araraume's political wings.

In all his political favour sharings and positions no one can identify anybody who came from the Araraume's camp.

And this is against the backdrop that both Senators had agreements and worked together to dismantle PDP and Rt Hon Emeka Ihedioha from Douglas House.

This could be true because Araraume was one of the Imo political Heavy weights who escorted the then freshly minted Governor Hope Uzodinma into Imo Douglas House.

However, that seems to have been the end of the brief political romance between Araraume and Uzodinma as no one has since again sighted the Isiala Mbano born Senator anywhere near Imo Government functions, or even with Uzodinma.

Since Uzodinma abandoned Araraume, in his usual manner, Araraume has quietly moved on without uttering a word about the Governor and his Government.

But Araraume's reaction presumably would be provoked should Uzodinma, as the Governor of Imo State, Chief Security Officer, and Leader of APC attempt to use his office to suppress Araraume's ambition in his own ancestral land of Okigwe Zone.

Indeed, Uzodinma will try to stop Araraume, because the Governor who is vigilant of other top politicians in the State is already apprehensive of Okorocha's influence in the State, which is the reason he keeps Okorocha in check with various probe panels ruminating through Okorocha's Eight inglorious years.

It is the same pattern adopted to cage Emeka Ihedioha's towering political profile, by instituting a quick-measure investigation by producing an alleged N19.63B paper said to be of a misappropriated fund in seven months.

And for Okorocha and Ihedioha, they have all tested the Imo Governorship diadem which has been elusive to Senator Araraume who has been trying since 2007 to no avail.

Therefore, Uzodinma's fears on not allowing Araraume any political foot hold in Imo State is predicated on the anxiety that Araraume is not yet done with being a Governor.

In other words, it would be assumed in Uzodinma's camp that allowing Araraume to climb back to office of a Senator again, will give him the leverage to not only remain relevant, but strong to pose a stumbling block to Uzodinma's proverbial second term Governorship bid in 2024.

But unfortunately for opponents, these permutations may not stop an Araraume who feels that among all his “Governorship Aspirant Contemporaries” he remains the only one yet to mount the saddle.

Since 2007 the Senator began to eye the Imo Governorship Seat, those he started with namely, Okorocha, Ohakim and Hope have all tasted the carrot. Even Ihedioha who joined in 2015 has also had a turn, now remaining only Araraume.

Therefore, any attempt to stop the Araraume Senatorial Train, assuming he joins the race, will invoke a lot of issues which will spiral to 2024 Imo Governorship Seat, except handled carefully.

Under this scenario, will Araraume run for Okigwe Senate for the Third time? If he is running will his APC colleague, Governor and friend, Senator Hope Uzodinma be his supporter?

These questions beg for serious answers.