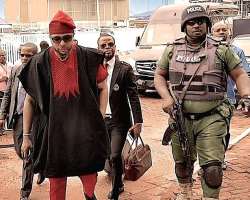 Police spokesman, Bala Elkana confirmed the withdrawal of the escorts to newsmen but said he was not aware of the details.

“It is true that his escorts have been withdrawn and an investigation ongoing. I do not have much information on it,” said Elkana.

E-Money, who is the younger brother of star artist Kingsley Okonkwo AKA K-Cee, is to be investigated over his flamboyant lifestyle.

E-Money, who also claims to be a clearing and forwarding agent, is known for his flamboyant lifestyle.

He boasts of two Rolls Royce, two Mercedes Benz G Wagons and other Sports Utility Vehicles worth billions of naira.

When contacted on the telephone, an associate of E-Money, Chidozie Dike, said he was not aware of the development and he believed it was not true.

“I am not aware and I don’t think this is true,” Dike said.

The probe into E-Money comes less than a year after that of an Instagram celebrity, Ismaila Mustapha aka Mompha, who was also known to show off his ostentatious lifestyle on social media.