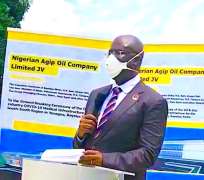 The Nigerian National Petroleum Corporation (NNPC)-led Oil & Gas Industry Intervention Initiative on COVID-19 over the weekend began the third phase of their support programme with the ground breaking ceremony for a permanent Emergency and Infectious Diseases Hospital for the South-South Region in Yenagoa, Bayelsa State. His Excellency, Governor Douye Diri of Bayelsa State speaking at the event

A release today in Abuja by NNPC Group General Manager, Group Public Affairs Division, Dr. Kennie Obateru, stated that the event flagged–off the plan by the intervention group to deliver lasting medical infrastructure across the six-geopolitical zones in the Country. Governor Douye Diri of Bayelsa State performing the ground breaking for a permanent Emergency and Infectious Diseases Hospital for the South-South Region in Yenagoa - a project of the NNPC-led Oil & Gas Industry Intervention Initiative on COVID-19.

Chief Timipre Sylva, Minister of State for Petroleum Resources who spoke at the event affirmed that the project was part of the Nigerian Oil Industry Coalition initiative led by the NNPC to support the nation’s efforts to tackle the COVID-19 pandemic.

He reiterated that the Oil Industry was contributing about N21billion worth of support provided through internal procurement processes of contributing companies.

Chief Sylva said that Bayelsa State was considered a suitable site for the project given its pioneering role in the history of Oil and Gas in the Country and its current contribution of about 40 per cent to onshore crude oil output.

The Group Managing Director of NNPC, Mallam Mele Kyari, who spoke through the corporation’s Group General Manager, National Petroleum Investment Management Services (NAPIMS), who is also the coordinator of the initiative in the Petroleum Industry, Mr. Bala Wunti, disclosed that the corporation was working with its Joint Venture partners across the Upstream, Midstream and Downstream sectors to support the Health Sector.

Bayelsa State Governor, Douye Diri, who earlier applauded Sylva for attracting the project to the state, performed the ground-breaking ceremony in company of other dignitaries including Mr Chukwuemaka Nwajiobi, Minister of State for Education, who represented the Chairman of the Presidential Task Force on COVID-19 and Secretary to Government of Federation, Mr Boss Mustapha at the occasion,