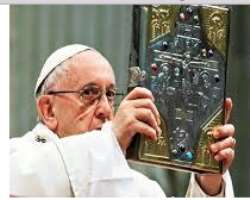 Coronavirus which is a Chinese contraption has been hijacked by the Illuminati Secret Cult and used to rattle the historical religious pomposity of the Vatican and Canterbury.

Coronavirus stuck at the center of Vatican, Rome and Italy, causing Pope Francis to shut down the hallowed windows of St Peter's Basilica. This followed the shutting down of public masses and advice to local Ordinaries worldwide to do same.

In United Kingdom, the doors of Canterbury was shut and Archbishop Justin Welby relocated to online church services. The Methodists, Presbyterians, Baptists with headquarters around the English axis all closed shops and relocated online.

The Chinese Virus officially killed over 3000 in China, unofficially estimated over 30,000. It killed 27,000 as at today in Italy (Highest in Europe) and 26000 in England (2nd Highest in Europe). These two nations represents the epicenter of western Christianity. The Seat of Papacy and the Seat of Archbishop of Canterbury represents the influences of the ancient and medieval churches over the West with influences spanning into Africa, North and South America . The Seat of Patriarch of Constantinople which held sway in the Eastern hemisphere, is not the subject of the discussion.

All these hallowed places of worship are yet to recover from an Illuminati coordinated attempt to create pandemics, seize people’s liberty , order compulsory chipped vaccinations and create a new world order.

Refreshing from my piece, ‘Coronavirus: The Illuminati and Chinese deadly blow’ I posited that

"COVID-19 is a Chinese Virus deliberately let upon the world which the Illuminati wants to use as a deadly blow to execute their one world government agenda. The problem is that the level of fear the Illuminati leadership wanted to strike through the rampant death has backfired"

"The ultimate goal of Illuminati secret group is to ensue a ‘One World Government’ where nations are reduced to regional counties, and a world where a unified political leader(Antichrist) and unified spiritual leader (False Prophet)a unified identification system ( Mark of the Beast) will lead a unified world into the hands of Lucifer. Revelation 13:1-18 elucidated the events and identities"

Equally quoting from a much earlier piece titled ‘Coronavirus: Jesus not Coming Soon, More Pandemics Coming’ I explained that

"Christians should not be quick to close churches because of ordinary COVID-19 because more pandemics are coming, more digitally dangerous technology are coming, bloody nuclear, chemical and biological wars are in the offing –all these before the Antichrist makes a grab for The Vatican and Jerusalem".

While the Churches in Rome and Canterbury has over the years concentrated on how to curb the dangerous trend of Islamic fundamentalism which resulted in risky worship of Christ in Arab and African countries including Nigeria, a greater enemy struck from behind.

From the time the Roman Church gained prominence till when Pope Telesphorus (AD 126-137) instituted the Seven Week Lengthen Season, the church had rather face consequences than not congregate to celebrate the Tridum, even if it meant Masses in graveyards and underground cells. The Edict of Milan of Emperors Constantine and Licinius (AD 312) and Edict of Thessalonica from Emperor Theodosus 1 (AD 380) were celebrated by the Churches in the East and West as the triumph of the sacraments against the organized nation state brutal persecutions.

In Nigeria, the closure of the churches followed similar patterns. The Catholic Archbishop of Lagos Most Rev Dr Alfred Martins issued decrees stopping Stations of the Cross, handshakes of peace and receiving of communion by mouth. When the Lagos Sate Government , three weeks later, limited religious gathering, the cleric suspended the process entirely, including the Holy Week Celebrations. His counterpart in Owerri, Archbishop Anthony Obinna refused to close churches, believing in the saving power of the sacraments, until an Imo State Government decree forced him to do so.

In Anambra State, the Anglican Archbishop of Awka, Alexander Ibezim suspended services and his Catholic Counterpart, Bishop Paulinus Ezeokafor followed suit while in Enugu, the Catholic Bishop Callistus Onaga suspended Church services while his Anglican counterpart, Archbishop Emmanuel Chukwuma vowed to celebrate the Tridum Mass before the State and Military authorities summoned him at Government House.

The mainstream pentecostal churches in Nigeria including the Redeemed Christian Church of God, Mountain of Fire and Miracles Ministry, Deeper Life Bible Church, closed services as speedily as government gave the decrees. Living Faith Church closed services after a backlash of criticisms. These pentecostal churches have tens of millions of members in Africa and Nigeria.

The Illuminati is a cult more determined to install a One World Government more than the Freemasons. In fact, while the Freemasons have tolerated and mingled with all religions, including the church, the Illuminati are more focused on the One World Government Agenda and treats organized religion with contempt. They had installed their people in every strategic place and industry worldwide.

From information available to me, they are the Coordinators in Chief of the Chinese Virus conspiracy in a panic attempt to vaccinate the world . The World Health Organization was a willing ally in the plot.

By the time this crisis is over, for the first time since AD 33, or AD 312, depending on the history of the Apostolic era or the era of freedom for the organized Roman Church,the church was shut during Easter and worshipers told not to congregate.

All the postulations from faith filled preachers and priests about how Jesus escaped to Egypt are lame duck defenses from an attack from an Illuminati which struck at the heart of Vatican and Canterbury.

The Vatican , as the eye of the church , should understand the spiritual undertones. 'Any One World Government Will First of all Abolish the Papacy before Making a Grab for Jerusalem'.

Instead of shutting down churches in holy fear, the Vatican and Canterbury should fight back, and wrench back initiative from the Illuminati.They should pick up the Holy Sacraments wherever they dropped it , shun supremacy politics, reinforce faith in the sacraments or else the Illuminati will use another crisis to further rattle and weaken the strategic influences of the Vatican and Canterbury over world affairs-Let Him that Has Ear Hear What The Spirit is Saying to the Churches.