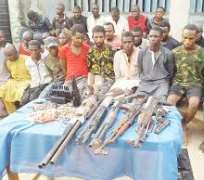 Foremost Civil Rights Advocacy group-: HUMAN RIGHTS WRITERS ASSOCIATION OF NIGERIA (HURIWA) has expressed shock and unfathomable surprise at the statement accredited to President Muhammadu Buhari in his Covid-19 broadcast of 27th April 2020, wherein the President told bewildered Nigerians that his government has reviewed how farmers can safely plant and harvest in this rainy season, a call many believed means Nigerians can return to their farms.

The Rights group recalled that on items number 35 on this list of issues raised by the President he said "We reviewed how our farmers can safely plant and harvest in this rainy season to ensure our food security is not compromised. Furthermore, we also discussed how to safely transport food items from rural production areas to industrial processing zones and ultimately, to the key consumption centres".

HURIWA beliefs that the President's claim either means he is not aware of the dangers faced by farmers across the country in the hands of armed herdsmen who have continued to wreak havock in different parts of the country or the president is simply underplaying such threats posed by the herdsmen.

HUMAN RIGHTS WRITERS ASSOCIATION OF NIGERIA (HURIWA) in a media statement endorsed jointly by the National Coordinator Comrade Emmanuel Onwubiko and the National Media Affairs Director Miss Zainab Yusuf said that: "Since the beginning of the year 2020, armed herdsmen have continued to carry out mindless attacks of farming communities across the country thereby forcing thousands of farmers and villagers to abandon their farms while running for their lives, a situation many security experts believe will impact negatively on food production this year.

HURIWA has also asked the Federal Government to meet with the governors of Taraba and Benue States to also determine the best law based solution to the inter-ethnic battles and bloody violence between the two prominent farming communities of Tiv and Jukun given that the continuous war between these huge farming communities which have escalated since the Covid-19 lockdown started may lead to scarcity of yams and other essential farm products.

HURIWA expressed huge disappointment on the government for failing to protect these local farmers most of who have fled their Communities because of incessant attacks by the herdsmen.

The Right organization believes the President's claim would have made more sense if he had highlighted in clear terms what his govenrment has done or is doing to put a stop to the atrocious activities of the armed herdsmen across the country. "We wonder why the Commander-in-Chief of the Armed forces of the Federal Republic of Nigeria has feigned ignorance of the incessant violent attacks of farming communities during this period of health emergency by armed Fulani herdsmen and terrorists. This is to say the least disappointing".

HURIWA therefore calls on the Federal Government to as a matter of urgency address an obviously looming food crisis by constituting a military task force to crush the armed herdsmen who have made farming impossible in several farming Communities across the country.

The Prominent Civil Rights Advocacy group HUMAN RIGHTS WRITERS ASSOCIATION OF NIGERIA (HURIWA) also calls on the Federal government to prosecute arrested armed herdsmen immediately to serve as detterant to others still engaging in such atrocious acts. This call became necessary as not a single armed herdsmen has been convicted so far for terrorism or related crimes. HURIWA wondered why the Federal Attorney General and minister of justice Alhaji Abubakar Malami(SAN) and the Inspector General of Police Mohammed Adamu have looked the other way whilst armed Fulani herdsmen and terrorists embark on wanton destruction of farms and farmers."

HURIWA also expressed her belief and conviction that any call for farmers to return to their farms without first addressing the issues above will amount to suicide call and the government will be held responsible for death and destruction of properties that may occur from obeying such calls.