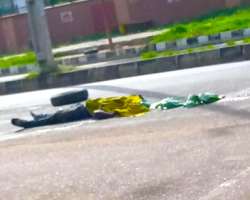 An unidentified corpse was found in the pool of blood on Gbongan/Ibadan expressway in Osogbo, capital of Osun State.

The unknown body was found on the road by the residents of the area who raised alarm to draw the attention of security agents who were on duty to enforce lockdown order imposed by the state government to prevent the spread of Coronavirus pandemic in the state.

Security agents and health officials were informed and they came to the scene and evacuated the dead body.

The cause of death of the man could not be ascertained at the time of filling this reports.

The deceased head shattered on the road, his brain scattered all over the places and his face could not be identified.

The Nigerian Voice observed that the incident caused panic in the area as resident and passersby expressed fear.

Some of the people in the area said the deceased fell from a lorry travelling at night to beat the lockdown.

The State Police Public Relation Officer, Yemisi Opalola said she was yet to be briefed on the incident .