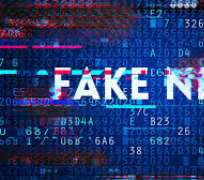 Ralph Fiennes is one of the most fearless individuals on Earth, having embarked on incredibly dangerous expeditions. But then, even Fiennes has his fears. He is afraid of heights. This actually brings to reality the axiom that, “there is no illusion greater than fear”.

To say the least, the fear of the COVID-19 pandemic has confounded even the most fearless among men. Not even the honey badger in the animal kingdom can deny the fiery wave of the pandemic. The virus has, no doubt, created palpable fear across the entire world. It has even raised suspicion among kinsmen, and distrust amid hitherto closely knitted persons, for the fear of the unknown.

However, the heightened tension created by the virus could only be subdued by positive disposition such that the already tensed atmosphere would not be further aggravated.

Sadly, rather than do things that would assuage the unpleasant circumstances, many are worsening the it through thoughtless spread of fake new, thereby instilling needless fears in the minds of the people.

For instance, recently, some mischief-makers circulated a document purportedly written by a senior citizen, Mrs. Olu Maduka, condemning the management of the COVID-19 pandemic by the Lagos State government. The purported author has since come out to deny the authorship of the satanic missive, in the process restating her full confidence in the ability of Mr. Governor and his team to manage the crisis.

The furor caused by this irresponsible act had hardly declined when a supposed list of hospitals, where COVID-19 cases was prevalent in the State and, therefore, unsafe for the residents to visit, surfaced. Like a wild fire, the phony news traveled so swiftly that the explanation given later by the State Ministry of Health could not easily erase the damage already done by the sham news.

According to the Ministry of Health, the development is the handiwork of mischief makers and fake news merchants who are bent on causing panic in the community and eroding the successes recorded in the battle against COVID-19.

The Ministry, therefore, urged all residents to disregard the list in its entirety and rely solely on the State Ministry of Health for information on the operation of health facilities and management of COVID-19 cases in the State.

The increase number of cases of the dreaded pandemic in the State has multiple implications. First, community transmission of the virus has intensified. Second, the strategy of ramping up testing, especially within local communities is working. Third, this is not the time to relax or to slow down in the efforts being made to break the chain of transmission.

It becomes imperative to allay different assumptions surrounding the increase figure, as it does not necessarily suggests that the situation is getting out of hands. Rather, it reveals the effectiveness of new approaches and strategies being adopted by the government, as all positive cases are now easily identified and swiftly attended to.

Recall that before witnessing this high figure, the State government had already set up sampling stations in the 20 Local Government Areas of the State in order to increase its COVID-19 testing capacity for citizens, who fit the case definition of COVID-19, to visit and drop samples for testing.

In effect, the establishment of these testing centres has assisted the COVID-19 response team get a better grasp of happenings in the community and also aid early diagnosis of the disease at the grassroots.

There was an unconfirmed report that certain Local Government Areas, LGAs, were identified as worst hit COVID-19 zones in the State. To some residents of the State, this unverified disclosure has become a major source of panic.

This hearsay report could have succeeded in warning residents of the affected areas to be more careful, as infected persons have been discovered there. It also sends a caution to the general public to be aware of the closeness of the pandemic to them.

However, rather than exhibiting fears and worries, the emphasis, for the residents, should be on maintaining social distancing, regular wash of hands and strict adherence to all other precautionary measures as directed by the State government.

As against spreading of fake news that heighten fears and anxiety, all hands must be on deck in the genuine effort to combat this deadly pandemic. Lagos residents are, therefore, strongly advised to shun news that could increase their volatility and decrease their level of immunity and resilience.

Indeed, experts have opined that except for academic purposes or to further equip and aid our level of preparedness to combat the virus, searching for additional information on the Internet about the virus is injurious to mental state.

It cannot be over-emphasized that the lockdown period should be productively used to prepare ourselves for the challenges that come with the post COVID-19 phase and be optimistic in our belief that the pandemic will soon come to an end. This will further help protect our immune system and make us stronger, fearless and focused.

When asked about one thing he would love to change about himself, the World’s Greatest Living Explorer, Ralph Fiennes, answered thus: “I'd like to have stronger willpower.” How apt! A stronger willpower, even in very daunting circumstances, is needed by every mortal to stay afloat of unpleasant life situations.

Therefore, as we look forward to light at the end of the tunnel concerning this pandemic, we must eschew all fear induced tendencies such that when the virus is eventually overcome we can still remain as resilient as we should be.

This, however, does not mean we should live in self-denial of the existence of the virus. Trust me, COVID-19 is real. Yes, its!