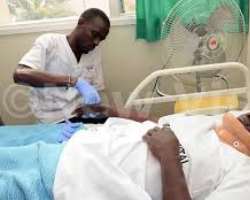 The Ugandan military dictator Gen. Yoweri Museveni is using the coronavirus lockdown to mask brutal attacks against artists, intellectuals, and opposition leaders with his latest victim being a member of Parliament named Francis Zaake who reportedly remains in grave condition in a hospital in the capital after apparent torture by the secret police.

Zaake was arrested April 19 in his Buswabulongo, Mityana Municipality in Mityana District. Zaake, responding to desperate pleas from his starving constituents, had been distributing free rice and sugar to them. He was arrested by the dictator who doesn’t want any independent relief efforts believing they would distract publicity from himself. Critics compare him to U.S. President Donald Trump who also seethes when other people play a role in the fight against cover-19 the coronavirus.

The police say by distributing food, Zaake defied the lockdown imposed by Gen. Museveni, thereby threatening the lives of Ugandans. He has been charged with attempted murder. Yet, there are reports of Ugandans dying of hunger while confined at home. About 75% of the population live hand-to-mouth on about $2 per day average.

On the other hand Gen. Museveni is playing politics with covid-19. Pro-regime members if parliament like Haruna Kasolo and Hanifa Kawooya, and a government minister, Rosemary Sseninde, all distributed free food without being arrested or tortured.

Zaake is at Iran Friendship Hospital in Kampala, the capital. Apart from his wife Bridget Namirembe, no other person has been allowed access to his room. She was forced to surrender her phone before entering his room.

The Director of Police Medical Services, Dr. Moses Byaruhanga who was part of a team that reportedly examined Zaake rejected reports about his condition. "He is very conscious, he can talk, he can sit up, he is generally okay," Dr. Byaruhanga said, when contacted.

Before his arrest Zaake posted this statement on social media: "I have been clandestinely giving out relief food items to my constitiuents, this, I will not stop doing..." Later, he posted, "The tormentors have broken into my home, they are breaking every door of my house searching to arrest me for the crime of sharing food with the starving people. Sad!" He also posted an image of two soldiers in uniform entering through a door of his house.

Gen. Museveni has been in office since 1986, when he seized power. The latest country report by the U.S. State Department highlights the unprecedented levels of human rights abuses, including state sanctioned murders, arbitrary arrests, and tortures. The dictator’s latest clampdown began when he first announced a national lockdown when the Covid-19 outbreak reached Uganda. But the country has no social safety nets and there are reports of people starving to death while confined at home. Abdallah Kiwanuka, a prominent lawyer was also arrested for distributing food to starving Ugandans.

Zaake represents an additional threat to Uganda’s military ruler because he is in his 30s and aligned with Bobi Wine who has become the voice of the People Power Movement in Uganda. The dictator faces election next year and it’s widely believed he will be easily defeated, even though he could refuse to yield power as he did after his apparent defeat in 2016. Over 80% of the population is under the age of 36, giving People Power overhwleming advantage. Gen. Museveni is believed to be aged between 75 and 80.

The dictator first arrested and tortured Zaake, Bobi Wine, and other leaders of the youthful opposition in 2018. Now once again, Zaake has been victim of apparent torture, according to sources in Uganda.