THE ENDLESS DILEMMA OF ATTA MILLS 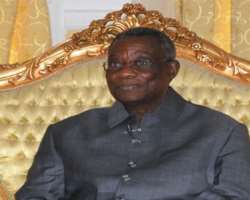 
The reflexive hostility to the disciplined President John Atta Mills from within his own National Democratic Congress (NDC) is troubling. It has been going on almost as soon as Mills was sworn-in as President. I think well-meaning Ghanaian and African democrats need to increase their vigilance in the name of democratic security. For almost two years, since he became president, Mills have been dented from within his NDC than the main opposition, the National Patriotic Party (NPP).

And most of the disorder are from the so-called founder of the NDC, ex-President Jerry Rawlings, his wife Nana Konadu Agyemang, and associates who are still mired in the NDC past of military command-and-control. The NDCs have been democrats by accident and not by choice, and this may be the reason why there are near-permanent wailing within the party to the distraction of Mills’ major national work. This is what you get when a political party emanated from years of military junta and hasn’t been able to extricate itself from its military mentality and democratize itself deeply enough. The NPP, however, was founded on coherent democratic conviction.

From Mills being "sick," "dead," "blind," "deaf," "dull," surrounded by "spiritualists," "slow," "stupid," "weak," "who born dog" to picking up a "Team B" people as his cabinet ministers and governing functionaries, Rawlings and his associates have tried consistently, to undermine the young Mills government. No doubt, Mills had thought of resigning but that will make him weak and deflate the fact that many Ghanaians like Mills style of governing. Despite that Rawlings and his cronies look down on him.

You got to be a superman to work under such maligned atmosphere where parts of one’s own party’s apparatchiks are simultaneously distracting you and breathing negatively heavily on you. The greater worry is that the impact on the NDC’s restlessly youthful foot-soldiers whom Rawlings has magical influence on, and are easily manipulable. So far Mills, apparently transfixed by these entire painful buzz, is yet to strategize political mechanisms to neutralize Rawlings and his acquaintances scrape.

It is incomprehensible. Either political psychology or political philosophy aside, you can only explain it as typical African Big Man and African Pull Him Down syndromes, for some inexplicable reasons, that borders on spiritual confusion, the African has the negative feelings to destroy each other as they try to progress. The most vexing of all these dim drama is Rawlings’ wife, though quiet about it despite media reports, thinking of contesting against Mills in 2012, though the Mills presidency isn’t even two years.

There is nothing wrong with Mrs. Rawlings contesting any elections but its too early and the timing, within her husband’s poisoned atmosphere, will psychologically sidetrack Mills from his main work. The general view is that Mrs. Rawlings behaviour is part of the attempts to bring Mills down. Why the Rawlingses will do this, isn’t clear. No doubt, Mills is said to be "worried," which is human, and there have been public lament for civility and for Rawlings and his cohorts to "leave President Atta Mills alone to do his work."

Why are Mills governing officials "Team B"? What is surprising is that from Mills himself to most of the figures in the ruling NDC, almost all of them have been working with Rawlings for the almost 20 years he ruled Ghana as a dictator. Now Rawlings treacherously turns around to brand the same very people he worked with as mediocre. If that is true, it’s not surprising that for the almost 20 years he ruled, Rawlings pluses are less that his minuses because his "Team" were "B" and "mediocre" – a very silly man giving a very silly vibrations and in the process mindlessly deflating Mills.

You got to be an evil and distinctively low person, of which Rawlings is hugely perceived in certain Ghanaian and African enlightened circles, to behave like this. And if African political history is anything to go by, Rawlings reminds Africans of Equatorial Guinea’s Marcias Nguema who undermined the very country he was ruling and in his madness killed almost a quarter of his people for no justifiable reasons. Like Rawlings, Nguema superstitiously believed he was God and can do anything he likes, including running Equatorial Guinea down, as Rawlings is doing to the Mills regime and attempted on the Kofour’s government.

As a former President and with his long years in government, Ghanaians expected Rawlings and his supporters to be demonstrating the ability to improve the governance atmosphere and to affect the ways in which important national issues are discussed as Botswana, Cape Verde, Mauritius and Seychelles indicate. How Rawlings and his cabal measure how "slow" the Mills government is has not being explained to Ghanaians. And how does one measure how "fast" a government is? Is governing a "race" that one has to cross a line with the speed of Jamaica’s global fastest man Usein Bolt? Botswana will tell Rawlings it is done within the atmosphere of diligence, the rule of law, human rights, freedoms and accountability. Globally, all governance (and development) measurements are done this way and not like speeding your way out.

The Rawlings thinking reveals how he is still stuck in military dictatorship and its associated rule by decrees, fear, and force, and not democratic tenets. Most Ghanaians still see him as "a dangerous man," in the face of Rawlings’ threats and doom-mongering.

In their divisive minds, Rawlings and his sect have been pressurizing the Mills regime to arbitrarily and inhumanly arrest former ruling NPP officials though they haven’t been charged with any criminal offence. In Rawlings, there are still imbalances in the Ghanaian democratic system of which the likes of Rawlings still harbour the feelings to overthrow a legitimate government or short of that disturb Ghanaians because they feel they are better than those governing – more for superstitiousã€€ reasons and not any scientific or democratic principles. How better Rawlings is than Mills and ex-President John Kufour, another person he has been attacking, is anybody’s guess?

While Mills and Kufour are university graduates (as is being recommended in the wisdom of the new military junta in Niger Republic for future Presidents because of the country’s disastrous experience), Rawlings has high school diploma but irrationally believe that he is better than anybody who have ever ruled Ghana. This is against the universal fact that the world is ruled and developed by higher knowledge, education, patience, deep reasoning and thinking and not any unfathomable superstition.

In Rawlings such feelings are mired not in higher reasoning and science (of which he deeply lacks, more because of his emotional mess) but deep moral crisis, irrationality, fallacy, and the African Big Man and Pull Him Down syndromes. Rawlings has strong credulous believes that if he isn’t in charge then there is spiritual and leadership vacuum that have to be filled by him and him only out of the over 23 million Ghanaians. So this is where all the vapid Rawlingses and their cohorts disturbing of the Mills regime actually headed to. In the 18 years of Ghana’s democracy that has seen more progress than Rawlings’ almost 20 years in power, Rawlings is an affront to Ghanaians and Africans democracy, their collective intelligence and aspirations, and their moral health.

For some time, Ghanaians have come to know Rawlings as empty – it isn’t because he finished only high school, it is the fact that he is sinister nonsense, a treacherous man and a chronic pretender. As ex-President, Rawlings conduct is so strange that it appears Rawlings has psychiatric issues (as had been Equatorial Guinea’s late dictator Macias Nguema that led him commit mass murder) and may have nightmarish screams overnight.

You got to have such perverted state of mind, at 63 years, to constantly engage in public brawl that borders on treason and the tacky, and still harbour the feelings of ruling Ghana again after being Head of State for almost 20 years. But either because of tribalism or greed, it is shocking such despicable, power drunk figure graced Ghana and the African political scene, and still has supporters including some elites who have failed to stop him. Remember Uganda’s Idi Amin, Central African Republic’s Jean-Bedel Bokassa and Macias Nguema, they all had supporters despite their evil.

Ghanaians own their security and development to forces of democracy and not a tyrannical, primitive, semi-literate buffoon, who exude more irrationality, darkness, and disorder (including massive beliefs in juju, marabouts and other twisted spiritualists, as have been all the African tyrants) and the arcane believe that God has ordained him to rule in a country of over 23 million and some 56 ethnic groups with slightly differing cosmologies. Which God ordained Rawlings? Is it Rawlings’ Ewe God or that of the Asantes or Dagombas or Fantis?

As Ghanaians (NDCs, NPPs or neutrals) are coming to grips with, you got to have such perverse minds of Rawlings and his cohorts to put an incumbent Mills under constant menace instead of giving Mills room to think about solving pressing development problems, some made by Rawlings and his associates. Among others: Rawlings has been inciting the "bulging youth" by agitating them and in the process they have been attacking personalities and destroying property; Rawlings paralyzed the Ghana Police Service to the extent that for some time they couldn’t perform their civic duties; as former President and role model expected to show higher integrity, Rawlings has been destroying the moral foundations of Ghana because of his disturbing behaviour; and Rawlings was so confused as to what is accountability that instead of his killings, destruction of property, exiling and threatening people for corruption, he and his associates were the most corrupt and hypocritical figures Ghana have come to experience.

This has made Rawlings an awful embarrassment to Ghana and Africa. It is, therefore, not surprising that Rawlings has come under intense insults and threats of "assassination." Despite all these attacks on him (including his own acknowledgement that Mrs. Rawlings has been advising him to behave) as a civilizing therapy, Rawlings continues to behave negatively.

Perhaps by some ultra-magnetic force or inferiority complex, Rawlings seems to surround himself with people who are equally so warped that they cannot tell his tigerish-face that he is a fool, a disgrace to Ghana and Africa, a hazard to Mills and Ghana, and concur to his farrago of nonsense that he has been unleashing on Ghanaians. All these matter because of what Ghana and Africa have gone through that brought upon them tragedies and agonies because of the like of Rawlings, Idi Amin, Bokassa and Nguema (the "Butcher of Africa" and a high psychiatric case).

While ex-President John Kufour was able to neutralize Rawlings’ negativity to the point of humiliatingly banning him from military installations and certain public places and the democracy-minded mass media keeping truck of him as a matter of protecting Ghana’s democratic order, in Mills he has channeled his obscurity, vulnerably using the fake fact that Mills and him are from the same NDC. And because of this, the Mills presidency is consistently being slandered by a moral and intellectual weakling who has a shocking exaggerated view of himself, for which nobody knows why, despite his acute inadequacies that would have sent him to either jail or death in other countries.