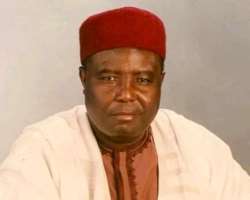 Borno Governor, Professor Babagana Umara Zulum has condoled with former Governor Ali Modu Sheriff and his extended family over the death of their patriarch, Galadima Modu Sheriff who died in the early hours of yesterday, in Maiduguri. The late Sheriff has been buried according to Muslim rites in Maiduguri.

Governor Zulum, in a statement released by his spokesman, Malam Isa Gusau, described the late Galadima of Dikwa as an elder statesman, a political force, a successful entrepreneur and a construction giant who for decades, made huge contribution to Nigeria’s infrastructural development, through the execution of hundreds of public projects particularly roads, that have benefited millions of citizens. “The late Ba Galadima Modu Sheriff is known to have established the largest indigenous construction firm in the northeast Nigeria whose operations covered different parts of Nigeria, helping to develop our country’s infrastructure, enhancing economic and social mobility and most importantly, creating hundreds of direct and indirect jobs.

"Borno state, where Ba Galadima’s construction firm is located, has benefitted not only in terms of infrastructure but also on job opportunities for citizens.

"He will be remembered as someone who invested in his home state, contributed to its building and empowering fellow citizens.

"The late Galadima was also generous and his generosity went beyond his family as he touched the lives of many citizens whom he came across.

"The people of Borno state will continue to remember him in prayers. I pray that Allah forgives his shortcomings, admit him into aljanna firdaus, bless and protect the family he left behind, Gov. Zulum was quoted in the statement.