Re- Hope Uzodimma's Crocodile Rendition And Vituperative Flippancies Against My Person On "my Radio Fm" Today.

- Why I Cannot Join Issues With A Compound Illiterate And A Functional Fraudster.
By The Nigeria Voice 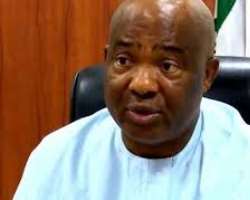 I listened with rapt attention the vituperative flippancies against my person by one Batros Nwadike, Hope Uzodimma's hired mercantilist , some hours ago this morning, on MY RADIO FM, where he reffered to me as kidnappers lawyer.

To me, such an illogically, disjointed and substantially hollow submissions by Batros Nwadike in that program is nothing but a mere rehearsal without any empirical substance and value and can only come from an intellectually deficient mind like Batros Nwadike, Hope Uzodimma's SA on political matters, who has lost his sense of sound judgement and normalcy.

Ordinarily, I would have wanted to respond to Batros Nwadike's incoherent trash, but condescending so low by joining issues with such a first-class charlatant will be a colossal waste of my precious time and also a way of dignifying his idiosyncrasies and giving him unprecedented visibility and recognition which he doesn't deserve. Batros is not my match.

But may I inform the Supreme Court imposed Governor that I am not and have never been a lawyer to kidnappers.

It is indeed laughable that a functional fraudster, a first class swindler, a compound illiterate and a shameless 419ner like Hope Uzodimma who has been severally arrested and detained in the past by many security agencies over his involvement in criminal and fraudulent activities will have the rocker temerity to dare hire a sea urchin like Batros Nwadike to pour venoms and tantrums on my person.

I am aware that this is nothing but a diversionary gimmick by Hope Uzodimma who is incapable of moving the State forward. We shall continue to check on him. I challenge him to concentrate in providing the dividends of democracy to Imolites rather than in this show of shame.