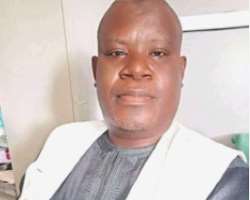 Borno State on Saturday recorded the first death from a confirmed COVID-19 patient who tested positive to the virus two weeks ago, The Nigerian Voice reports.

The deceased who is a retired anesthetic nurse, died on admission at the University of Maiduguri Teaching Hospital (UMTH) on Saturday making the first COVID-19 death to be recorded in UMTH, Maiduguri.

According to a reliable source in the hospital ,"the deceased , Babanguda Buba Gombe was admitted in the Medical Ward last week and died under suspicious circumstances which led to a test that was conducted on his corpse and the result of the test carried out on the corpse came back positive for COVID-19.

“The bad thing is that he had contact with several health workers both within and outside the UMTH. He was brought from Pulka to UMTH by two nurses who are now at risk together with their families.

“After his death last night, female friends, relatives and other mourners gathered in his house to visit his family members who are direct contact to the deceased".

“And the worst of all is that he was staying in USUMH staff quarters which is within the hospital premises, thereby exposing more health workers and patients as well,".

It was confirmed that the deceased, who is a retired anesthetic nurse, died at the University of Maiduguri Teaching Hospital on Saturday.

This has already sent fear and apprehension to many residents of the Maiduguri city, the state capital and around the town where the deceased first became ill before being rushed to UMTH Maiduguri by the MSF which he was working with.

It was further gathered that the deceased was for over two weeks having symptoms of the disease but did not disclose it to anybody. Nobody can rightly speculate where he contracted th disease from. As the fate of those he was relating withe specially the IDPs, his colleagues, friends, relations, families, health workers at Pulka and in UMTH hangs in balance, we do hope that the authorities will hasten up investigations.

The situation has already generated a lot of concern since Saturday despite the death of the COS to the President, Abba Kyatis. The Chairman of the High Powered Committee on Prevention and Curtail of the Spread of COVID-19 in Borno State, Borno State, Alhaji Usman Umar Kadafur, this morning summoned an emergency meeting of the committee members and other collaborating partners including the MSF, OCHA, Red Cross, UNICEF, UNHCR, and BSPHCDA among others for crucial discussions on the matter.

It is expected that the committee and other partners will be putting heads together to contain the situation and ensure the virus does not spread to other places the deceased may have visited.

All officials are reluctant to comment on the evolving issue. However, official statement is being expected before the end of today. The Chairman and Secretary of the COVID-19 High Powered Response Team have declined to speak on the matter as at the time of this publication.