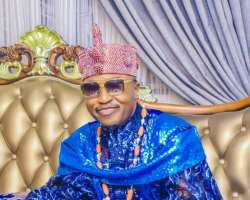 A viral video has shown the Oluwo of Iwo, Oba Abdulrasheed Akanbi, wrapping a substance believed to be marijuana in his palace.

The video was believed to have been leaked by Oba Akanbi’s ex-wife, Chanel Chin.

This was because it became public knowledge on a day Chin, a Canadian, granted a lengthy interview in which he accused the Oluwo of several atrocities, including raping her on the first day they met.