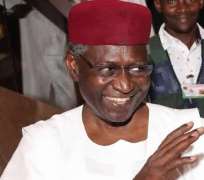 He had subsequently moved to Lagos for treatment according to a statement he issued. Details of his death are still sketchy but Femi Adesina, presidential spokesman, confirmed it.

“The Presidency regrets to announce the passage of the Chief of Staff to the President, Mallam Abba Kyari.

“The deceased had tested positive to the ravaging COVID-19, and had been receiving treatment.

“But he died on Friday, April 17, 2020.
“May God accept his soul.
“Funeral arrangements will be announced shortly.