Stay-at-home: Did Delta Governor Direct The Police To Kill Deltans At This Critical Time? 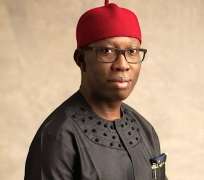 Since Tuesday 14th April 2020, when the Delta State governor, Dr. Ifeanyi Okowa addressed Deltans on the update of the Coronavirus in the state, life have not been the same.

The governor gave a stern directive to the Commissioner of police, Muhammed Inuwa Hafiz, to apprehend anyone who flout government's orders.

Some persons who were going to beer parlours to drink despite the social distancing among other measures to curb the spread of the disease, made the governor to impose a 7:00pm to 7:00am curfew and directed the Commissioner of police to see to it that no one defies the order. However, the governor did not also fail to call on law enforcement agencies to show some courtesy to health staff who are on the Frontline with victims of Covid-19 epidemic while he Commended the police boss for his actions on some officers who took the opportunity to maltreat people.

In all the address, there was no part the governor directed that Deltans should be killed or detained and bailed with money running into thousands of naira.

On the 15th of April 2020, the police hit the ground running with the directive of the governor by arresting people who stayed outside beyond 7:00pm.

It was gathered that in the capital city of Delta, Asaba, several persons were arrested with a clause; alleged payment of N70, 000 which was later reviewed up to N100, 000 for those who go against the stay-at-home order.

As at 7:00pm Wednesday, around amusement park and Elder Thaddeus Ediele Street, off Ibusa road, police officers were seen chasing residents around the street to apprehend contraveners.

It was also learnt that a boy was shot in Asaba, for reasons that could not be ascertained.

In Sapele, about five persons were shot for protesting the extension declared by the state governor over hunger occasioned by the inability of the state government to provide paliative for the citizens.

The police has also detained some of these boys whom they tagged as hoodlums.

The State Police Public Relations Officer (PPRO), DSP Onome Onowakpoyeya, confirmed the violent protest, saying that some of the hoodlums had been arrested by the Sapele Area Command.

Similarly, media practitioners, in the course of carrying out their constitutional responsibility, have unfortunately, turned targets for attacks by members of the public, particularly security agencies and governmental bodies in the state. The Chairman of the Nigeria Union of Journalists (NUJ), Delta State Council, Comrade Michael Ikeogwu and a reporter with Daily Trust newspapers were harassed and manhandled somewhere in Effurun, Uvwie Local Government Area of the state for inquiring from officials of the state environmental taskforce if people should congregate for clean up in the face of effort aimed at curtailing the spread of the Corona virus.

Few days after that incident, a photo journalist with the Pointer newspapers, Norbert Amede, was brutally attacked by security agents (the police) in Ibusa, Oshimili North Local Government Area. The attack left Amede physically disfigured and hospitalized for days.

On Wednesday, April 15, 2020, Uvwie Local Government registered another attack on media personnel from Delta Broadcasting Service (DBS), Warri, who were on their regular routine to monitor compliance of the lockdown and more importantly, social distancing at the Effurun Market.

He tasked the police to allow any health official who is able to produce his or her identification card a passage. Did the Delta State governor direct the police to kill Deltans while trying to implement the stay-at-home order?