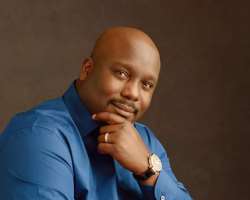 Keniebi Okoko, Bayelsa-born billionaire businessman and philanthropist, has died in Lagos, throwing many Bayelsans into mourning.

Some reports said Okoko, son of Professor Kimse Okoko, died on Tuesday during a tummy tuck surgery in a Lekki hospital, Lagos

A power outage was blamed for the death. Okoko was in his early 40s.

He contested the Bayelsa primary for the governorship ticket of the Peoples Democratic Party last year. He did not succeed.

He was also a pastor of Salvation Ministries in Port Harcourt. Many Bayelsans and people who he had touched in his lifetime, were shocked by his sudden death.

They poured out their anguish in posts on Facebook. Ojims Michael wrote: “Keniebi Okoko please wake up, please remember all we prayed about.

“This one came as a big shock to me last night, suddenly gone forever OMG you are just too young for this I can’t even wrap my head around this oh God why?, wrote Stephanie T.Douglas.

Pro-Jane Whatson said: “A big loss to all of us at salvation ministries. Just take it as God know why and celebrate his salvation and look very for God while on Earth”.

Michael Osaro Jnr wrote a lengthy tribute:
“I can’t find the rationale behind the death of a promising and wealthy young man like this who is even a pastor, a giver and a faithful servant of God.

“Na waaa oooo. Watin man go do for this life self. Life is absolutely nothing my brother.

“Rest in Peace and sleep well in the bosom of the Lord my beloved pastor Keniebe Kimson Koko. We will miss you greatly”

Okoko was the founder and CEO KDI Group, said to be involved in oil and gas.

He was reputed to be the godson of former Nigerian leader, Goodluck Jonathan.

He also went to University of Port Harcourt.