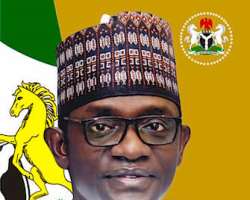 His Excellency, Governor Mai Mala Buni has applauded the interim relocation of the Chief of Army Staff Lt. Gen. Tukur Buratai and other top military officers to the North East in a renewed operation to clear the menace of the Insurgency in the region.

Gov. Mai Mala Buni described the presence of the Chief of Army Staff and his officers in the frontline states, as motivation to officers and men in the battle field to fight with vigour, confidence and resilience.

The Governor commended the President and Commander-in-chief of the Nigerian Armed forces, Muhammadu Buhari for his continued support to end the insurgency.

His Excellency further called on the people of the state to remain vigilant and volunteer timely information on any suspicious movement and persons in their communities.

He encouraged citizens to observe the preventive measures against the Covid 19 virus pandemic.