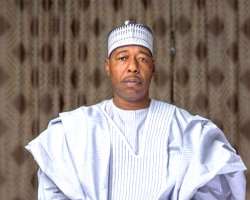 Governor Professor Babagana Umara Zulum of Borno state denied himself easter Monday holiday and visited Gajiganna town of Maguneri LGA of the state to enlughten the community on COVID-19.

He used the opportunity to support 11,000 vulnerable citizens, faced with humanitarian needs outside the state capital, Maiduguri.

The Governor, also personally supervised the distribution of cash, food and non food items to the most vulnerables in the community where over 11,000 households benefitted from the palliatives.

The beneficiaries comprises of 6,000 women who received 5,000 naira each accompanied with wrappers. 5,000 men who are head of households, each received a bag of rice, a bag of maize grain and 3 litres of cooking oil as internally displaced persons (IDPs) from official camps and within the host community (Gajiganna).

Member Representing Magumeri at the Borno State House of Assembly, Audu Mustapha, the Chairperson, State Emergency Management Agency, SEMA and a few members of the State Executive council joined the govenror in the distribution.

Zulum used an outdoor public address system with long range of out-reach to warn the students against coronavirus while urging them to cooperate with the measures spelt out by th high powered committee in the fight against the disease.

”We are all aware of the enormous challenges Borno is already faced with. As responsible Government we are doing everything possible to contain this virus from spreading into our state. However, this can only be achieved with your cooperation”, Zulum said.

Governor Zulum, while in Gajiganna, also paid a morale boosting visit to the military formation involved in fighting Boko Haram.

He interacted with the formation's high command and expressed Borno’s appreciation to the Nigerian military for their sacrifices and determination to end the Boko Haram insurgency.

He also assessed a closed Comprehensive Health Centre in Gajiganna and with the relative peace in the town, Zulum directed immediate reopening of the health centre.

Zulum was also at Tungushe, a town in Konduga local government area on his way back, where he assessed a Hospital and a Primary School both destroyed by insurgents.

The Governor directed the immediate rehabilitation of the school and hospital to serve the residents.