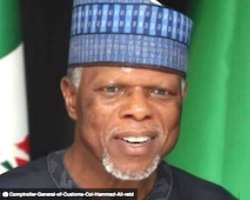 In compliance with a directive by President Muhammadu Buhari, the Comptroller General of Customs, Hameed Ali, has approved the release of 158 truckloads of rice and other items worth N3.251billion to support the Federal Government’s efforts to alleviate sufferings associated with the ongoing lockdown in some parts of the country.

The rice and other items were seized by the NCS from smugglers at various times.

According to a statement by Customs Public Relations Officer, Joseph Attah, other items released for distribution to vulnerable citizens include 30 trucks of vegetable oil; one truck of palm oil; 54 trucks of tomato paste; two trucks of spaghetti and noodles; one truck of ankara wrappers and one truck of lace fabric.

Attah noted that only edible items certified fit for human consumption by the National Agency for Food Drug and Administration and Control (NAFDAC) would be released to the public.

The statement reads, “Reacting to pains associated with the effects of the lockdown in some parts of the country, some Nigerians have taken to the social media to call on Nigeria Customs Service to share seized rice and other edible items to members of the public.

“While some of these calls appear well intended, others had attempted to create the impression that Customs officers have the liberty to use seized items as they deem fit. Some even mischievously impugned that the items may have already been shared to cronies. Nothing can be further from the truth.

“It is therefore necessary to explain that in line with the provision of section 167(2) of CEMA CAP C45 LFN 2004, seized items upon condemnation and forfeiture to the Federal Government by a competent court of jurisdiction are kept in government warehouses pending Government directive on its disposal.

“Accordingly, in compliance with the Presidential directive, the Comptroller-General of Customs, Col, Hameed Ali has already approved the release of the following relief items to boost the Federal Government continuous efforts to alleviate sufferings associated with the painful but necessary ongoing lockdown in some parts of the country.

“Estimated market value of these items is N3, 251,806,000 with Duty Paid Value of N2, 034,954,765. It should be noted that only edible items certified fit for human consumption by NAFDAC will be released to the public.

“As a responsible agency of Government, NCS appreciates the opportunity of contributing its quota to Federal Government’s continuous efforts to provide relief for Nigerians in this difficult time. NCS remains committed to strictly adhering to all extant laws governing seized and overtime cargoes. Despite the prevailing risks, the Service will continue to discharge its functions of securing the land borders and collection of revenue that is needed during and post Covid- 19 pandemic period.”

While urging the officers and men to remain focused on service delivery, the Customs boss reminds the operatives and all Nigerians on the need to obey all directives of Government and medical experts to stop the spread of the deadly virus.