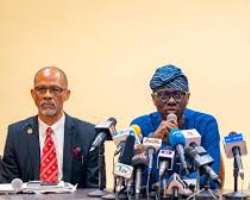 The Lagos State Governor, Babajide Sanwo-Olu has announced the discharge of another COVID-19 patient from the Infectious Disease Hospital in Yaba.

He announced this in a tweet on Tuesday, bringing the total number of people that have been discharged in the state to 32.

The governor said, “I announce with immense joy, the discharge of another patient (a female) who has fully recovered from our facility at Yaba.

“This brings to 32, the number of patients we have successfully managed and discharged in Lagos”.

His announcement comes a day after two persons – both females – were released from the government’s Infectious Disease Hospital after officials confirmed that they have fully recovered from the disease.

Governor Sanwo-Olu revealed that both patients, who had tested positive for coronavirus, tested negative twice consecutively.

He said that Lagos has an upper hand in the war against COVID-19 as it is winning and will eventually seal the victory.

The governor thanked the front-line health workers in the effort to curb the spread of coronavirus in the state, thereby urging residents to adhere to and obey all health advisories issued by health experts as they coordinate resources to beat the disease.