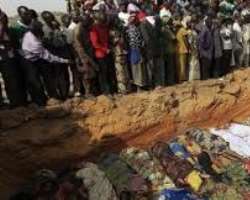 Onitsha, Eastern Nigeria, 4thApril 2020-Not less than fifty (50) defenseless Christians were hacked to death in Nigeria in the month of March 2020. While twenty-five deaths were recorded in the first half of March 2020, twenty-five others took place in the remaining half of the month, bringing the total to at least fifty (50). The killings were solely perpetrated by the Jihadist Fulani militants who also killed no fewer than ten Christians in first two days of April 2020. The monitored killings did not include those killed during the period by Boko Haram terror jihadists, if any.

The above was the position of Int’l Society for Civil Liberties & the Rule of Law in a statement released today at Onitsha, Eastern Nigeria and signed by Emeka Umeagbalasi, criminologist & graduate of security studies (Board Chair), Lawyer Obianuju Igboeli, (Head of Civil Liberties & Rule of Law), Lawyer Ndidiamaka Bernard (Head of Int’l Justice & Human Rights) and Lawyer Chinwe Umeche (Head of Democracy & Good Governance)

Fears Of Coronvirus May Have Scaled Down The Killings In March

It is either that the number of Christians killed in March 2020 by the militant Fulani jihadists is higher than the above figure but was under-reported or under-covered as a result of shift in local and international media and global attention to the Coronavirus scourge; or that the killings recorded a sharp drop in March, certainly not because of ‘change of heart’ or Government counter successes; but because of the fears of Coronavirus Pandemic.

Previous Statistics
It is recalled that our organization had on March 8, 2020 released a special report, “in memory of the victims of Islamic Jihad in Nigeria”. The special report had held that: “a total of 350 Christian deaths were recorded in the first two months of 2020” and that “Jihadist Fulani Herdsmen were responsible for at least 7,400 Christian deaths since June 2015 out of total deaths of 11,500-12,000”. The deaths included “Jihadist Fulani killing in June to Dec 2015 of about 525 Christians, 1,300 deaths in 2016, 1,700 deaths in 2017, 2400 deaths in 2018 and 1,200 deaths in 2019”. It was also observed that all the victims of the killings by the Jihadist Herdsmen were Christians. For freshness of the details, visit our website ( www.intersociety-ng.org ) for: Researched Facts on Massacre of Christians in Nigeria dated and uploaded on 19th March 2020.

Corroboratively, by the account of the US based “Int’l Committee on Nigeria”, quoted by the Zenger News.Com, “Fulani militants killed 1,276 (Christian) civilians in terror attacks during 2019”. The NGO further said that “the organized attacks included at least 22 attacks on Christian villages last year” and that “nearly all the victims are Christians”. The international group will be releasing a statistical report on the genocidal killings in coming weeks.

Why Battlefield Or Combat Deaths Are Not Counted: It must be reminded that although the killing of any member of human family is unacceptable and condemnable, but Intersociety is more concerned, legally or expertly, with killings perpetrated outside the law by state actors or non state actors particularly those involving death of defenseless civilians including women, children and the age-killed on account of their ethnic or religious beliefs or other nonviolent grounds. Our deep concerns including advocacy attention are given to killing of unarmed civilians in situation of armed conflict; with little attention paid to ‘legitimate killings’ or killings involving state actors and non state actors in battlefields (i.e. Government soldiers versus Boko Haram/ISWAP terrorists).

Statistics Of Recent Killings
The 50 Christian deaths in March 2020 included the 13thand 14th March 2020 killing by the Jihadist Herdsmen of seven Christian mourners in coordinated attacks in Tyohembe and Tse Ayev communities located in Guma Local Government Area of Benue State. The attacks took place between 11pm of Friday, 13th March and early hours of Saturday, 14th March 2020. Among the slain Christians were one Chikwa, Taza Abuur and Tarnum Yanum. Another set of Christians, numbering three were also hacked to death on 31st March 2020 in Ancha area of Bassa Local Government in Plateau State.

In Southern Kaduna, a total of eleven Christians including a District Head and his brother were hacked to death by Jihadist Fulani militants. The killings took place between Thursday, 26th March and Tuesday, 31stMarch 2020. According to the Southern Kaduna Peoples Union (SOKAPU), in its statement dated 31st March 2020, no fewer than six defenseless Christians were hacked to death in Komo Community, Guruku ward in Chikun LGA of Kaduna State. On Monday, 30th March, the District Head of Jagindi in Jema’a LGA of the State, HRH, Danlami Barde and his brother, Musa Barde were killed while the wife of the latter sustained several gunshot injuries.

Again on Thursday, 27thMarch, three Christians-Hassana Bala, Jamilu Hassana and Halima Bala Nawela, all female-Christians; were hacked to death in Kuduru, a Gbagyi village in Chikun LGA of the State. In one of the Jihadist Fulani militants attacks in the first week of March, no fewer than four Christians were hacked to death and three women raped including wife of a traditional ruler (Tyoor Chado). The dastardly act was perpetrated in early hours of Thursday, 5th March 2020 in Mbanyiar Community, Guma LGA of Benue State.

The killings by the jihadist Fulani militants have continued into the first and second day of April 2020 with burning to ashes and death on 1st April 2020 of at least seven senior citizens of Christian faith in Hulke and Nkiedoro communities located in Bassa Local Council Area of Plateau State. The killings were confirmed by the Zenger News.Com, the Stefanos Foundation, Jos and some local media including the Guardian Newspaper of 3rd April 2020. Those killed were all aged between 67 and 90. In the carnage, at least 23 houses were burnt to ashes or destroyed.

The following are the names of the seven senior citizens burnt to death including two caregivers and their patients: Gado Muntu, 67, Mary Alhassan, 70, Izinpa Muntu, 72, Jummai Geye, 78, Madah Imeh, 80, Rigwe Muntu, 84 and Gado Ngulu, 90. The herdsmen also in the early days of this month, April 2020 invaded Arimogija community in the Ose Local Government Area of Ondo State and killed a rice farmer, Jacob Odushe and his son, Adura as well as a teenager, Victor Ejeh, declared missing one week earlier.