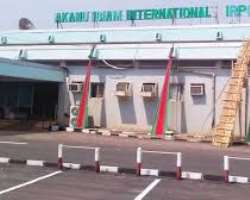 A frontline Civil Rights Advocacy group HUMAN RIGHTS WRITERS ASSOCIATION OF NIGERIA (HURIWA) has accused the Federal Government of President Muhammadu Buhari of sustaining the 'apartheid policy' of exclusion of the South East of Nigeria from enjoying strategic national assets by his recent order suspending renovation works at the Akanu Ibiam International Airport which is the only international gateway for over 65 million Nigerians of Igbo extraction.

HURIWA dismissed as infantile, sinister and irresponsible, the explanation of the Aviation minister Senator Hadi Sirika the Cousin of President Muhammadu Buhari for the suspension of works at the Enugu International Airport based on the current health emergency of CORONAVIRUS PANDEMIC IN NIGERIA.

HURIWA; One of the few credible CIVIL SOCIETY ORGANISATIONs following up on the progress of works at that only International gateway to Igboland, faulted the Aviation minister's half-baked excuses for the suspension of renovation works because according to it, the global health situation has not stopped operations of key and indeed essential sectors of the economies of most nations of the world including the services of the Aviation industry, the security services, the telecommunications services and even environmental protection and sanitation agencies and wondered why the Aviation minister is being clever by half by hiding under CORONAVIRUS PANDEMIC that got to Nigeria around mid March of 2020 to suspend a major national task like the renovation of the only International Airport serving the entire South East of Nigeria which CONTRACTUALLY should have been completed by today.

HURIWA affirmed that given that the works that commenced since Months ago has a timeline of April and then the Rights group wondered why Buhari's regime could suspend the work on the eve of the expected completion? This is state sponsored fraud by other means and must never be accepted by the good people of the South East of Nigeria, HURIWA asserted.

"HURIWA is aware since October last year that the Minister of Aviation, Hadi Sirika, said that the Akanu Ibiam International Airport, Enugu would be completed by April 2020. We are aware that he the minister of aviation said this while speaking with news men in Abuja after the defence of the ministry’s budget before the Senate Committee on Aviation."

"And then HURIWA vividly recalled that His Excellency President Muhammadu Buhari had on October 17, approved the release of N10 billion Special Intervention Fund for immediate repairs and upgrade of the airport. President Buhari it was who told the World then that he was aware of the central nature of the airport, which was closed for repairs since August 24, to the socio-economic development of the Southeast. Nigerians must be awoken from their collective slumber to recall that Nigeria's current smooth talking Aviation ministry's boss the Katsina state born Senator Hadi Sirika, who noted that money had been approved by Buhari said, “we are waiting for the release and I am sure it will be released very soon and stated that his office was meeting with the contractor. He will give us his programme of work; we will look at that programme of work diligently and ensure it is procured within the time and within the budget".

"And subsequently, we were never told that this N10 billion was never released because when the Political leadership of the South East of Nigeria met the President around October the Presidency said the N10 billion intervention fund has been released and the Aviation minister continuously briefed Nigerians on the progress of work there and had at a time stated that the job has been done up to 90%. The decision of this same Federal Government, on Tuesday, announcing the suspension of ongoing reconstruction work at the Akanu Ibiam International Airport, Enugu is irresponsible politics and is a reminder that the administration is finding it difficult to give to the South East of Nigeria her due right as equal citizens of the Federal Republic of Nigeria".

HURIWA continued thus: "The Aviation minister Senator Sirika had said the project, which had gone beyond 90 percent, would have been delivered before Easter and then decided to be economical with the truth by stating that considering that the construction workers have downed tools owing to the COVID-19 pandemic, the Federal Government hereby officially announce suspension of procurement.. it beggars belief that the Federal Minister of Aviation is now playing the ostrich by stating comically that at the only international Airport for Ndigbo, the work would have been completed in 6-7 days, but the workers left to be with their families in view of the social distancing,” the minister declared".

"This is a POLITICAL PRANK TAKEN TOO FAR. The Minister should recall these workers to go back to site and safely deliver the project observing social distancing and deploying the services of technology and protection gears to deliver the contract that they ought to have delivered today being April. We will not accept this COCK-AND-BULL STORY of Hadi Sirika. Is Hadi Sirika unaware that cleaners and other essential service providers are at work now? Is the minister not working and we are aware that his office operates 24/7 virtually because there are still emergency flights that are still being allowed to operate with special permission. How is the minister and his key staff going about their duties but believes that the critically acclaimed Enugu international airport should be abandoned because of the so-called social distancing even when policemen, private security and street sweepers are working?"