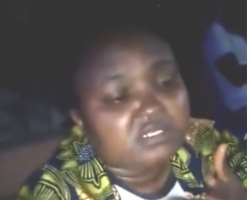 The quiet kingdom of Okpanam, a suburb of Asaba, the Delta state capital, has been thrown into sorrow as alleged Fulanis herdsmen struck the Community with mayhem.

Trouble started on Monday night in Graceland Estate in Okpanam, Oshimili north local government area of the state when it rained cat and dog as the herdsmen attacked the apartment of one Mr. & Mrs. Joseph and whisked the husband away after the wife prepared rice for them.

Mrs. Joseph who narrated their ordeal said the herders came through the window and pointed gun on the husband and ordered him to open the door.

According to her, after the door was opened for them and they gained access, the herders commanded the wife to prepare meal for their visiting bandits to eat and have life and strength to continue with their evil.

She said after the preparation of the rice, she was ordered to dish them into a flask (Cooler) which they took away with the husband to an unknown destination.

The woman affirmed that the persons who attacked them and abducted her husband were herders as they spoke the Fulani language.

According to her, she put a call across to the Divisional Police Officer (DPO) of Okpanam, who told her that he could not come out as it was late.

She also claimed that she called the control room, alleging that the respondent was not around while the other respondent on another line said the person is not in Okpanam division but directed her to go and make entry the next morning.

It was learnt that in two days the community has witnessed two alleged kidnap cases with deaths.

"They brought my husband out under the rain and asked him to lie downand they took me inside and asked me to prepare rice for them which I did. They took all my husband shoes, clothes, phones, ATM Cards and all my jewelry. When they want to leave, they took my husband away".

Meanwhile, the Director-General of the Young Nigerian Rights Organisation, Comrade Victor Ojei, claimed that he has drawn the attention of the state government to the attacks on Issele-Azagba and Okpanam but the warning fell on deaf ears.

"I predicted the attack on Issele-Azagba Indigenes in 2019, I told the governor of Delta State few months before the attack, advised him on what to do to prevent it, I was ignored cause no action was taken. Nobody believed me.

"When I said Okpanam, Delta State should brace up for incoming herders on the 4th of March 2020, nobody took me serious. Issele-Azagba, happened, Okpanam Delta State, it is your turn like I saw it coming", he alleged.

The DG called on the state government to step up security across the state, "Governor Okowa you are the Chief security officer of Delta State. Do something by activating the proper use of N6.9 billion allocated for security budget".

While accusing the state government of silence when herders attacked Issele-Azagba, the same government chested out on Corronavirus because of the billions of dollars involved.

"When it is herders killings at Issele-Azagba, Delta State government could not make a speech, but when it was Covid-19 pandemic, they were all going for radio, TV and social media campaign because there is billions to be exploited locally and Internationally.

"This is gross wickedness if Delta State government fails to activate strategies to end this menace of alleged herders tormenting Deltans", he wept.