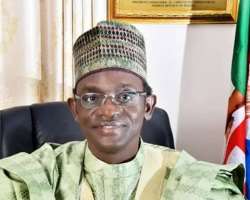 As the world faces the Corona virus pandemic, His Excellency Yobe state Governor Hon. Mai Mala Buni, wish to assure the people of Yobe state that government is taking all necessary measures to check possible eventualities as government has established isolation center equipped with the basic equipment.

The governor has directed the state ministry of health to remain vigilant and proactive.

He assured government's full support and cooperation in the fight against the scourge.

The governor urged the people to report any suspected case in their communities for urgent medical attention.

He also advised the people to adhere to medical advises and personal hygiene of constant hand washing.

Gov. Buni has also directed a statewide sensitization campaign to raise awareness on the deadly virus.

The governor said as a people of faith, we should avoid unnecessary panic and pray for Allah to see us through this trying moment.

"We should keep faith and pray to Allah for his intervention for us to overcome this challenge" he said.