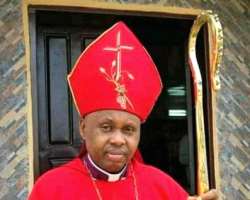 As women globally celebrate the 2020 mothering Sunday, the Archbishop, Province on the Niger, and Bishop of Awka Diocese (Anglican Communion), Archbishop Chibuzor Alexander Ibezim has advocated for more empowerment and integration of women for new scopes and opportunities, towards ensuring and promoting societal balance and equity.

This was contained in a goodwill message released by the Bishop, to herald the celebration, and in which he also frowned at the perceived injustices being meted out to women in the global society.

According to him (quoting the United Nations), the labour force participation rate for women aged 25—54 is 63% compared to 94% for men; a global mismatch, he opined, shows that women and girls continued to be segregated in work places and by extension suffering from extreme poverty. He condemns, in its entirety, Gender-Based Violence (GBV) or Violence Against Women and Girls (VAWG), which he described as a 'global pandemic' that affects one in 3 women.

He said, "Let me use this mothering Sunday to call on companies in Nigeria to be gender sensitive by building an inclusive workplace in order to entrench gender diversity in workplace.

"I am of the believe that in order to attract and retain talented women in companies gender diversity would be a deliberate act by the industry to give opportunity for more women to join the labour force. This, I believe will not only bring about inclusiveness and dynamism in the economy but will engineer competitiveness and growth in the companies.

"I passionately appeal to companies and organizations to discard gender inequality in workplace and promote gender diversity by integrating women for new scopes and opportunities needed for societal balance."

He expressed optimism that a deliberate and collective rise against gender inequality would be a great step towards poverty reduction, sustainable development, good governance and a progressive society.

Reiterating that women empowerment brings in inclusive, fair and balanced society; the Anglican prelate said, "I advocate actions targeted at empowering women in all facets of life and career by shunning domination by a single sex in work places. Women should be considered in leadership roles and not be stereotyped or discriminated. Individuals, be they women or men, people with right attributes should be given leadership roles.

"I warn that women should not be subjected to torture and harassment in workplaces as it deters them from aspiring to break the glass ceiling. Workplaces should not be unsympathetic to working mothers."

On the increasing rate of domestic violence, the Archbishop tasked women to imbibe the virtue of endurance and tolerance, and to continue showing love, allowing 'reason' to prevail and enjoying their marriage rather than kill their spouse whenever provoked. He said, "Violence against women must not be tolerated, but women must bridle their tongues always and respect their husbands. Men, I charge you to love your wives.

"People should be able to jaw jaw and resolve their problems rather than resort to killing their spouse."

On $5bn Abacha loot, the Archbishop said, "I was shocked to hear that the Federal Government has no records on the spending of about $5 Billion Sani Abacha loot between 1999 and 2015.

"It is disgraceful for such a whopping amount to be retrieved ,spent and there is no records according to Attorney General of the Federation and Minister of Justice, Mr Abubakar Malami. The FG said it has recovered $ 630 Million since 2018 of the $5b."

Reacting to the recent explosion that rocked Lagos State, Archbishop Ibezim said, "The news of the explosion took me aback as I am pained such could still happen to our people in this century.

"I commiserate with the Catholic Archdiocese of Lagos, Archbishop Alfred Martins, for the disaster at Bethlehem Girls College, Abule Ado, Amuwo Odofin Lagos for losing the Education Director, Administrator of the school and some students who died in the unfortunate fire incident. "I commiserate also with other churches of Christ affected by the inferno after the blast, the government and people of Lagos State, as well as the families and relations of those who lost their lives, and property in the fire incident.