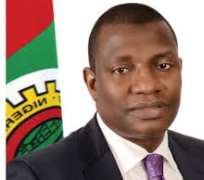 Even his most vitriolic critic cannot pretend not to notice the spontaneity and natural flow of events around him. They were devoid of the emptiness and banalities that often characterize public officers in this clime. Whether in a remote village or at a local government headquarters, or the state capital, people trooped out in large numbers, lined the routes whenever the people have a scant idea of the visit of this man commonly referred to as the oxygen to the soul of NNPC.

He is a quintessential gentleman; considerate, restrained, calm even in stormy waters, faithful to the cause of his duty, inspirational and exemplary in all his ways, kind to a fault, confident and focused.

For Bala Wunti the new GGM NAPIMS, providence is the key word.

I don’t intend to bore you about this man’s background since I am not very close to him, but what I have I will give unto you which were sourced from an independent research we carried on this quiet but highly successful public servant and consummate administrator.

Born in Bauchi State, Bala
Wunti, is a thoroughbred oil and gas industry professional. He is a graduate of Chemistry from the Ahmadu Bello University, Zaria, with an MBA in Marketing from Abubakar Tafawa Balewa University, Bauchi and a Postgraduate Diploma in Management from thesame institution.

From 2004 to 2010, he was appointed as the Head of Market Research, Brass LNG Limited, Lagos. Furthermore, between 2013 and 2015, Bala Wunti became the Senior Special Advisor, Technical, to the Group Managing Director, NNPC

From 2017 to 2019, he became the Group General Manager, NNPC Corporate Planning and Strategy, in 2019, he was appointed the Managing Director, Petroleum Products Marketing Company.

As the PPMC MD, he ensured that petrol scarcity was eliminated by promoting transparency in fuel distribution.

It was in recognition of his sterling achievements, dedication to duty and loyalty that he is now the new GGM of NAPIMS which is usually meant for those who have a deep knowledge about the oil and gas business.

PRAYER:
As you step into the new office, may the God of heaven bless you now and always and may He give you more grace to perform your duty accordingly and may He grant you peace, good health, joy and wisdom.

From generation to generation your name shall be celebrated and history and posterity shall be kind to you.

Your star shall never dim and your legacy shall remain as solid as the rock of Gibralter far into the distant future.