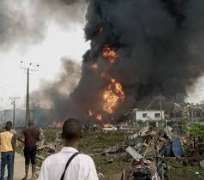 The Prominent Civil Rights Advocacy group HUMAN RIGHTS WRITERS ASSOCIATION OF NIGERIA (HURIWA) has described as inefficient and ineffective the workings of the publicly funded National Emergency Management Agency (NEMA) and other Lagos State GOVERNMENT's funded first responders over their abysmal failure to respond to the distress calls of the school children trapped in the suspected petroleum Pipeline explosions in Lagos which may have led to the undetermined number of human casualties. THE LAGOS STATE GOVERNMEMT MUST SET UP A JUDICIAL PROBE PANEL ON THIS DISASTER AND MANY OTHERS AND FIND LASTING SOLUTIONS TO THESE AVOIDABLE DISASTERS.

HURIWA said the Abule Ado petrol pipeline explosion in Lagos happened and it took the relevant public funded first responders several hours to respond to the raging fires which in the opinion of the HUMAN RIGHTS WRITERS ASSOCIATION OF NIGERIA (HURIWA) Shows that institutions such as the Lagos State Fire Service, the National Emergency Management Agency (NEMA), the Lagos State Emergency Management agency are in need of comprehensive overhauls in order to bring them in speed WITH the 21st century demands of urgency, efficiency and effectiveness which are the central attributes of FIRST RESPONDERS in the event of either natural or man-made disasters.

"From available documentary evidence it is clear that but for the swift efforts of ordinary Nigerians made up of mostly young Nigerian boys who rescued most of the students of the Bethlehem Catholic Boarding School, the number of casualties would have been multiplied. There are clear enough evidence to show that for many hours the fires raged and the victims were left to their own device if not for the humanitarianism of those brave Lagos youths who actively coordinated effective rescue operations through unorthodox means with no facilities. The Federal government must do something radical and fundamental to salvage the National Emergency Management Agency (NEMA) from its current deteriorated standards. On the part of the Lagos State governmemt we are shocked that these kinds of disasters keep repeating themselves intermittently with the attendant high tolls of casualties and the State administration has not bothered to put in place effective strategies to curb these occurrences. The Lagos State government must be blamed for allowing the development of factories and residential buildings such as boarding schools to be located within short distances from such explosive facilities like the NNPC PIPELINES. The Lagos State administration should be blamed squarely for letting such accidents to be choreographed and orchestrated through the Lagos State government's lack of urban development planning strategies and due to corruption by the Housing developmemt departments of the state government ".

HURIWA condemned the National Emergency Management Agency for failing in its mandate and for rushing to the media to claim that the the explosion which occurred at Abule Ado, Trade Fair axis of Lagos State was not caused by a disruption of the Nigerian National Petroleum Corporation oil pipeline just as HURIWA carpeted the acting Coordinator, Lagos Territorial Office, NEMA, Mr Ibrahim Farinloye, for making what he calls the senseless and ireational clarification in an interview with the News Agency of Nigeria in Lagos in which he Mr. Farinloye in a poor judgment said contrary to information earlier put out on social media, the explosion which occurred about 9 a.m. was unconnected to pipeline vandalism. "Why should NEMA official spoke from the background of hearsay and rumours? Did they carry out forensic investigations to ascertain the real cause of that explosions which as we understand consumed many inmocent school children? Is there no longer logic and scientific research methods in that GOVERNMENT funded office to such a ridiculous extent that the official could grant media interview to give his opinion on the cause of a disaster that is yey to be scietifically investigated? This professional rascalism in the administration of public offices in Nigeria must stop".

HURIWA recalled that the NEMA'S Lagos COORDINATOR told the media as follows: “From the information given by officials of the Lagos State Fire Service, who are currently on the ground, the implosion is not connected to pipeline but MIGHT have occurred in a factory located in the Abule Ado area. Emergency responders are on the ground while others are still on their way to the scene. The situation is under control and we hope to get more information soon to ascertain its cause".

HURIWA lamented that in less than five years, the current administration under President Muhammadu Buhari has completely destroyed the National Emergency Management Agency and has rendered the agency so inefficient so much so that NEMA is no longer working the way it used to do some few years back when the publicly funded First responsers were highly efficient and effectively responsive to distress calls in moments of emergencies all over Nigeria. "Now NEMA has become an empty talking drum and a shell of its former self to an extent that a huge fire broke out in Lagos and ordinary Nigerians were there at the scenes of this Emergency and were doing the jobs of NEMA and FEDERAL and LAGOS STATE FIRE SERVICE and for at least the next one hour there was no official first responders in place. This is a national scandal. NEMA needs to be overhauled and made to begin to work as it used to be before the hierarchy of that agency was politically hijacked by non professionals who see it like a cash cow. The FEDERAL GOVERNMENT must act now to stem the deterioration of the national capacity to respond to emergencies ".