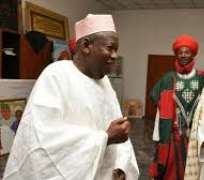 The Coalition of United Political Parties, CUPP, has vowed to launch a legal offensive to nullify the banishment of former Emir of Kano, Muhammadu Lamido Sanusi II by the Governor of the State, Abdullahi Ganduje.

The Nigerian opposition coalition said it received the news of the illegal and arbitrary dethronement and purported banishment of Sanusi II by the All Progressives Congress, APC led Government of Umar Abdullahi Ganduje with shock.

CUPP, in a statement on Tuesday, signed by its National Spokesman, Ikenga Imo Ugochinyere, described the dethronement and banishment which it alleged had the tacit support of the APC led Federal Government, as barbaric, illegal, unconstitutional and a grave assault against constitutional democracy and the fundamental rights guaranteed under Sections 34, 35, 36, 38, 39, 40, 41, and 43 of the 1999 Constitution as amended and a bold move to desecrate an ancient revered traditional institution.

The political parties noted that the sacked Emir was not given the right to be heard, adding that this renders the action of the Kano State Executive Council illegal, arbitrary, unconstitutional and null and void.

According to CUPP, no Governor or President has the right to banish a Nigerian citizen or forcefully move him to any location in violation of the right of movement, right to life and a multitude of other rights except by an order of the court.

The parties said that as an opposition, they will not dabble into traditional issues but when Government actions tend to assault the laws of the land and intimidate citizens for speaking out, they must at all times rise to say no.

“The ancient ecclesiastical punishment of banishment and deportation cannot stand in a democracy. This much has been held by the Court of Appeal in the locus Classicus case of Government of Kebbi State vs. HRH Mustapha Jokolo(2013) LPER where the Appellate court condemned and declared that banishment and deportation of a deposed king is unconstitutional,” CUPP added.

“Is the Kano State Government above the law that it cannot obey the Courts of the land? In that case Per ADUMEIN, J.C.A. (Pp. 72-73, paras. E-D) the Court of Appeal held that:

“The Governor of Kano State has no right to act outside the clear and unambiguous provisions of the Constitution of the Federal Republic of Nigeria, 1999 (applicable to this case). Section 35 (1) of the said Constitution provides that every citizen of Nigeria is ‘entitled to his personal liberty and no person shall be deprived of such liberty’ except in the circumstances set out in subsections (a) to (f) thereof. Section 40 of the same Constitution provides that ‘every person is entitled to assemble freely and associate with other persons.’

“On the issue at hand, Section 41(1) of the Constitution is germane and it provides thus: “41 – (1) Every citizen of Nigeria is entitled to move freely throughout Nigeria and to reside in any part thereof, and no citizen of Nigeria shall be expelled from Nigeria or refused entry thereto or exit therefrom. (2) Nothing in subsection (1) of this section shall invalidate any law that is reasonably justifiable in a democratic society – (a) imposing restrictions on the residence or movement of any person who has committed or is reasonably suspected to have committed a criminal offence in order to prevent him from leaving Nigeria; or (b) providing for the removal of any person from Nigeria to any other country to – (i) be tried outside Nigeria for any criminal offence, or (ii) undergo imprisonment outside Nigeria in execution of the sentence of a court of law in respect of a criminal offence of which he has been found guilty: Provided that there is reciprocal agreement between Nigerian and such other country in relation to such matter.

“The appellant has not been able to show that the banishment of the 1st respondent from Gwandu Emirate in Kebbi State and his deportation to Obi in Nasarawa State were in accordance with the clear provisions of Section 41 of the Constitution of the Federal Republic of Nigeria, 1999.

“The banishment and deportation from Kebbi State by the Governor of Kebbi State, on or about the 3rd of June, 2005 of the 1st respondent to Lafia in Nasarawa State and later to Obi, also in Nasarawa State, is most unconstitutional, and illegal. By the said banishment and deportation, the 1st respondent has been, unduly and wrongfully denied his constitutional rights “to respect for the dignity of his person”; “to assemble freely and associate other persons” – including the people of Gwandu Emirate of Kebbi State, and to “move freely throughout Nigeria and to reside in any part thereof” as respectively provided in the Constitution of the Federal Republic of Nigeria, 1999.”

“Nigeria is still a Constitutional democracy. We are not in competition with Mugabe’s Zimbabwe, Idi Amin’s Uganda or Nkuruzizia’s Burundi. This operation destroys anybody or any institution either traditional, parliamentary and judicial that stands up against the desires of a few incompetent people to hang on to power must be halted.

“A man who was caught on video stuffing Dollars in his pocket, supported by the Buhari APC to manipulate his way to power despite public rejection, shamelessly sat as a moral judge both as accuser and judge and passed sentence of dethronement and banishment on the peoples Emir despite not a perfect man but is a shining light and hope for the future.

“In view of the illegality, we urge the peoples Emir to seek redress in court to set aside this barbaric and obnoxious action for the good of the nation and others who may be silenced and treated like him.

“In the event of going to court, we have set aside the sum of Three Million Naira (N3, 000, 000:00) only as an independent contribution to his legal team to aid the redress of these obnoxious barbaric attack on our constitutional democracy and traditional institutions by a gang of incompetent and shameless institution destroyers.

“We will challenge, as a group dedicated to the promotion of democracy, the banishment proclamation in court as such is barbaric and a direct plot to enslave and hunt out of existence perceived enemies of an incompetent and corruption weakened regime that is hustling for Chinese loan to remain afloat after wasting national wealth through misappropriation and misapplication.

“Let it be made clear to Governor Ganduje and APC leaders, Kano is not Uhuru Kenyatta’s Kenya where Miguna Miguna was banished from the country and forced into a plane and was dropped in Dubai, this is not British colonial controlled the Bonny Kingdom where Jaja of Opobo was deposed and exported out of his kingdom. Democracy and Constitutionality have brought a new dawn and ended the barbaric acts of yesterday.”