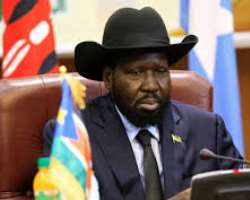 This is an open letter to President Salvar Kiir, I am writing to you dear President in my capacity as a citizen of East Africa, as an African, a pan Africanist, a lover of the dignity which truth and freedom gives to human life and as passionate crusader for the rights and freedom of conscience, freedom of expression through the media, and freedom of intellectual socialization in all the spaces that humanity can access. Now, let me hope that this letter gets you well , as it also gets your foot-soldiers in proper shape of the spirit fit enough to appreciate the inherent gist of the letter so that you collectively act thereupon in an effect of accepting to respect the democratic spaces for all the 70 tribes of the people of Southern Sudan, to respect the liberty and equality of both the tall and short Southern Sudanese or liberty and equality of both the brown and the dark skinned Southern Sudanese, a desired out-come in which I dream to see you President Salvar Kiir stop perpetrating some kind of economic persecution against Taban Lo Liyong for nothing other than him having intellectually greased the conveyor belt of democracy to roll down the aisle of history by speaking naked historical truths of democratic technicality to the powers that be in the East African land of Southern Sudan.

Facts-In early February 2020, the government of Southern Sudan under the auspice of you, the one Salvar Kiir, suspended Professor Taban Lo Liyong from University of Juba.The Nature of suspension was indefinite with no clear explanation about the date on which Taban Lo Liyong is supposed resume his work at the University. The reason why Taban was dismissed is due to his gadfly nature of intellectual audacity evinced in the article he wrote and published in one of the editions of the Juba Monitor during the month of February 2020.The content of the article was simple and clear; political leaders in southern Sudan must stop arming people to kill one another, they must fairly represent all the 70 tribes of Southern Sudan in sharing government jobs like ministries and state corporation leadership, the government of Salvar Kiir must stop arming the tribe of Dinka so that they can brutally loot and grab land-resources from the un-armed non Dinka communities of Southern Sudan, the government of Salvar Kiir must ensure inclusive governance of the oil resources by using the money from the oil to fight poverty ,disease and starvation but not to buy guns for killing the rural peasants from other tribes that don’t speak Dinka language. The article also invited the world to appreciate an idea that if the government of Salvar Kiir is not capable to the above cited it must open itself to the referendum through which the new constitution can be made forging way for the proper formation of the state, the nation and the government of Southern Sudan.

Dear President Salvar Kiir, active history of the state of Southern Sudan justifies the position taken by Taban Lo Liyong. Some few technical things must be done to form a pragmatic state, a solid and inclusive nation and as well as a modern type of government in Southern Sudan. Otherwise the world must be prepared to see a series of military Juntas succeeding one another like the actors in the movies of nickelodeon, Tom & Jerry or any another cinematic juvenile phantasmagoria interpolating what was supposed to be a mature political state. The gnome-like technical fallacy eating like a wood-pore into the rotten substructure that was supposed to form Southern Sudan as a political state was clearly explained by professor Mahmoud Mamdani in an article published in the Boston Review which decried the panicky manner in which the USA, Britain, Japan and United nations acted when forming the New State of southern Sudan from Sudan. In the same article, Mamdani subtracted the United Nations to remain with the three Western bourgeoisie States which he euphemistically described as the ‘un-holy trinity’ that betrayed state-formation in Southern Sudan.

And it is true, Southern Sudan was formed in a hurry to create accessible land to be used as a military strong-hold for the Western powers in their war on the Islamic Statists like Al gaeda, Al-Shabab, Hezb Allah, Boko-Haram and mention all in the region of Arab speaking Islam confessing countries in the North Africa, Middle East and Arab emirates. And the only way for this strong-hold to be formed was to hurriedly cut off the region of Southern Sudan from Sudan that was then led by Omar Al Bashir. It was so unfortunate that the African union did not interfere with the process to question and caution the quality of the State that was being formed for our brothers and sisters in Southern Sudan. It happened like this not because the member States of the African union had ideological incompetence to deal with the matter, but most of them had chosen to have a blind eye to these facts so that they could enjoy diplomatic leeway through which they could make money from un-guarded oil, wood and war in Southern Sudan.

These political precedents are not a road to any strange revelation, they only mean that there is no freedom in Southern Sudan. Indeed, it is astounding to see President Salvar Kiir and his fellow Dinka tribes-men claiming that there is freedom in Southern Sudan, when only the actual truth is that the people of Southern Sudan are now buckling under the yoke of dictatorship of the military Junta formed by a hundred percent one tribe of the Dinka Bor in mad looting spree of community resources as they use their crude military capacity to kill the poor, to rape women, to leave children in starvation as they subject a whole nation to the tyranny of disease and poverty.

Dear President Salvar Kiir, on the inception of Independence of the County of Southern Sudan you did not mind to demobilize the former guerrilla fighters to come up with a modern Army that can give professional services of national defense to the people of Southern Sudan. You deliberately maintained illiterate guerrilla and upgraded them into the state Army with a technically incompetent command structure. Let it be known to you dear President Kiir that the former bush guerrilla will never form any modern armed defense service unit. However, it is so commendable that now you are trying to demobilize some of the former guerilla who have started becoming aged into a para-military service for wild-life protection. I was fortunate in the month of August 2019 to meet some of them at Kenya Wildlife Services Training Institute in Naivasha, they had been brought there for a course of three years in Wildlife management. They were around two hundred thin, dark skinned and extremely tall men and women in their late forties and early fifties. All of them were Dinka Bor, they were all proud of having had served in the bush war and now the government has taken them to school. Some among them were close family members. Like in one of the classes, there was a son, a father, a mother, a daughter in law and a brother in law. They were all on a full government sponsorship which included tuition, food, a beer a day and earning a salary. When I asked one of them why other Southern Sudanese people that don’t speak Dinka Bor have not come to learn, he responded to me in a vulgar manner- Dinkar Bor are in power and hence they are the ones to come to school.

Dear President Salvar Kiir, you were the best speech maker when you recently came to Kenya to attend the state sponsored funeral of the late President Daniel arap Moi at Nyayo Stadium in Nairobi . The most remembered words in your speech were that, ‘the people of southern Sudan remember Moi as a beacon and an Icon of liberation, freedom and Independence of Southern Sudan’. Your tall physique and the black bowel of a Godfather hat your head made you look a spectacular speaker. I was among the Gallery, I listened to you, and I looked at you and mused within myself about what your were speaking, then my mind’s eye peregrinated from those foreigners in Southern Sudan that are often unfairly condemned to life sentence or to other long term jail terms after only going through a skewed trial by a military Kangaroo Court without any right to access representation by a lawyer to the 63 non-Dinka Bor speaking tribes in Southern Sudan that have been systematically excluded socially and politically by your government. I wondered which type of freedom and Indepdence you were talking about. Or you thought a Dinka Bor with a gun is freedom? No, it is not freedom, either in Southern Sudan or anywhere else.

Thus, these are the things that Taban Lo Liyong was staging an intellectual protest against. He is not doing this for his personal benefit, but for the benefit of East African citizens. But it was so sad that you never listened to him, instead you chose to persecute him by imposing some economic sanctions on him through unfair and indefinite suspension from his academic work at University of Juba. You were unfair in your choices. Not only unfair but also misfortunate in your misperception that Taban Lo Liyong works for money, no, his work at University of Juba is substantially charitable in kind and nature. He is doing it out of sympathy to redeem the girl-child and the boy-child of Southern Sudan from the abyss of illiteracy, and technical as well as intellectual incompetence.

Mr. President Salvar Kiir, you are not one of your kind to try entrenching a gestapo like police dictatorship by muffling and terrorizing the media and those that are organic in the sense of being intellectually revolutionary. It is indisputable fact that ancestry of world politics is a pantomime of your kindred. Ranging from Anton Gramsci detention in Turin, Russian Stalinist dictatorship that persecuted the poet Osip Mantelsdam and Alexander Solsyntsyn, the Nigerian tribal dictatorships that terrorized Wole Soyinka, the Kenyan dark-time political leadership that detained the poet Abdallah Abdallatif, the Ugandan political buffoonery that terrorized Okello Oculli, Teresa Nanziri Bukenya and activated mysterious death of Okot P’ Bitek , the Apartheid of South Africa that dreamed to muffle Alex La Guma and Denis Brutus to many other historical experiences that wanted to make the muzzle of the gun to tower the power of truth in the pen. But it did not, the truth that was spoken straight to the face of power always reigned. Just as it is true that the ideas, dreams and prayers of Taban Lo Liyong over Southern Sudan will be realized at one time in the future.