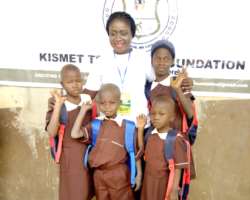 A good Samaritan in Osun State, Mrs Folasade Oyinlola has provided school uniforms, shoes, books, bags and other items for some indigent pupils in the state to enable them go to school in good shape, learn and become successful in life.

Oyinlola who is the Executive Director of Kismet Treasure Foundation selected 20 indigent kids from Ori-ade and Obokun Local Government areas of the state and also picked six from Orolu and Irepodun LGAs respectively.

The children were all kitted out in new uniforms and they also received learning materials including backpacks containing books and other necessary items that would aid their learning in school.

It would be recalled that KTF extended similar gesture to many indigent school children in the state last year October during the unveiling in Osogbo, the state capital.

In a chat with The Nigerian Voice, Oyinlola said "When we started monitoring and paying unscheduled visit to the beneficiaries of the one we did last year, we discovered that there are still a lot of them that need help. With our limited resources, because we cannot do all, we decided to add more of them."

"So, this time around, we picked 26 more from four Local government areas. And it was worth all the stress that we went through. Kismet Treasure Foundation decided to add to the number of Orphans and Vulnerable children (OVC's) that we did last year October."