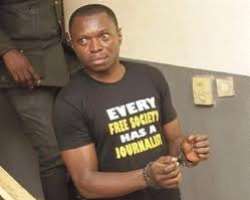 The Human Rights Writers Association of Nigeria (HURIWA) has called on the Inspector General of Police Mohammed Adamu to direct the Federal capital Territory commissioner of the Nigeria Police and other relevant security agencies to ensure the immediate arrest and prosecution of attackers of one of DAILY POST Deputy Editors, Comrade Ameh Godwin.

In a statement signed by its Coordinator, Emmanuel Onwubiko, the prominent civil rights group lamented the frequent attacks on journalists in the country, especially by politicians, adding that with the current situation where journalists are being harassed, attacked and beaten, a sane and civilized society would be difficult to attain. HURIWA said that the media practitioners are playing strategic national role as the national conscience which is provided for in section 22 of the Nigerian consritution just as the Rights group said that on no account should a media practitioner be subjected to dehumanizing treatment and physical or psychological torture for carrying out their professional duties. HURIWA said that there are legal avenues for redress should any politician feel that he or she has been defamed by any media reports. "Nobody must be licenced to resort to self help measures because in Nigeria which is a constitutional DEMOCRACY we do not practice the principle of MIGHT IS RIGHT but we practice the PRINCIPLE OF RULE OF LAW".

According to HURIWA, " It has been brought to our knowledge that a Local Government Chairmanship candidate on the platform of the People’s Democratic Party and an ex-Caretaker chairman of Ogbadibo LGA, Prince Onuh, his brother, Frank Onuh and many other suspected political thugs had allegedly attacked one of DAILY POST Deputy Editors in an attempt to allegedly murder him in Area 8, Abuja.

"We call on the Nigeria police to immediately arrest the suspects and all those involved in this alleged premeditated attack without any further delay even as there is the urgent need for the National Human Rights commission (NHRC) and the hierarchies of the two dominant political parties in Nigeria viz Peoples Democratic party and the All Progressives Congress to consistently and continually give extensive capacity building trainings on good governance standards and human rights to all their members and especially to the aspirants to key political offices in Nigeria so the respect of the fundamental human rights of all citizens as enshrined in chapter 4 of the Nigerian Constitution; the Universal Declaration of Human Rights (UDHR); International Covenants on civil and political rights; African charter on Peoples and human rights and all other global human rights laws are mainstreamed in the policy making processes and implementation of all policies in Nigeria".

"We also call on the relevant security agencies to carry out discrete investigation on the matter and check and recheck the character of the suspects to determine whether we should have such people in our government, especially at the grassroots where he is supposed to be the Chief Security Officer of a Local Government assuming the allegations are anything to go by".

“We in the Organized Human Rights Community in Nigeria hereby call on the Benue State Peoples Democratic Party, PDP, and the Benue State Governor to investigate this matter and review the character of their candidates in the Local government election which we gathered will hold soon in the State."

HURIWA further warned that should the investigators determine the extent of their culpability in this alleged dastardly crime of physical violence on a JOURNALIST then Prince Onuh and his alleged political cohorts should be held responsible should any other thing happens to other journalists and groups who in the wake of the zoning controversy in the State dropped their individual opinions on zoning."

It said, " Again, we warn that should anything happen to any other journalist or individuals from Ogbadibo Local Government Area of Benue State, the PDP as a political party in power in Benue State should be held responsible just as we urge the Police to ascertain and verify the allegations that the fellow being accused of attacking the Deputy editor is alleged to have vowed to go after many others.''

HURIWA consequently warned political parties and State governors to put mechanisms in place to verify the backgrounds and temperaments of their aspirants and to ensure that they repose their trust and confer their prestigious tickets to only trustworthy party faithful who must possess the virtues of responsibility; competence and goal driven characteristics so they can take charge of the grassroots as against having alleged questionable characters and thugs as council chairmen. The Local government level according to section 7(1) of the Nigerian constitution is the birth place of democracy because the leaders of that tier of government must be democratically chosen by the people in a free, fair and transparent electoral process.