Corporal Oyeli Nowonam: The Soldier That Killed 4 Colleagues, Injured 2 Before Killing Self {Photos Of The Tragedy} 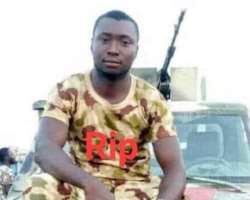 Efforts to disarm him and avert the tragedy proved abortive as he quickly killed himself.

The Acting Director, Army Public Relations, Colonel Sagir Musa, in a statement on Wednesday, said the wounded personnel in the incident were currently in stable condition at the Nigerian army hospital in Maiduguri.

According to him, efforts are ongoing to contact the families of the gallant colleagues who paid the supreme price in the line of duty.

He added that investigation into the case has since been instituted to determine the circumstances that led to the unfortunate incident.