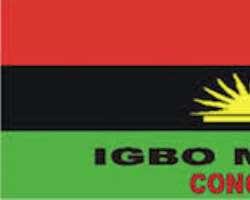 The Miyetti Allah Cattle Breeders' Association, MACBAN, Southeast Zone, have debunked a report that the group is plotting a retaliatory attack on Ifite Ogwari Community following a skirmish that claimed the lives of four herders.

A group, Igbo Mandate Congress, had issued a statement which it copied to the Ohaneze Ndigbo, Pentecostal Fellowship of Nigeria and Christian Association of Nigeria; as well as the diplomatic community, alleging that Miyetti Allah was planning a retaliatory attack in Ifite-Ogwari over the killing of some of its members.Image result for miyetti allah

The publication titled, “Fulani vs Anambrarian: Police Arrest Ifite-Ogwari Elders as Igbo Mandate Congress Seeks Justice”, had portrayed the Fulanis as a destructive and murderous group, causing harm to the people of Ifite-Ogwari and their farms. It accused Fulanis of responsibility, for about two weeks running, for the detention of some Ifite-Ogwari leaders by the Nigeria Police, insisting that such detention was consequent upon Miyetti Allah's insistence.

But reacting to this in a press statement, the chairman of MACBAN, Southeast, Alhaji Giddado Siddiki, described the statement by Igbo Mandate Congress as capable of turning Anambra State into a theatre of war.

Said he, 'It is as worrisome as their insinuation that ''the claim by Miyetti Allah leaders that they killed four herders is a subterfuge to attack the community''.’

In a press statement made available to Fides Media run by the Catholic Diocese of Awka and Igbo Mandate Congress, Alhaji Gidado Siddiki, insisted that his group was all for peaceful coexistence with their hosts.

'We in the leadership of Miyetti Allah, Southeast Zone, are increasingly achieving the understanding we seek with communities here because of our conscious efforts at giving our people proper orientation to facilitate friction free fellowship with our landlords who, despite the rising anxiety and sense of insecurity in the country, have largely continued to express the hospitality for which Ndigbo are known

'I wish to express utmost confidence that the security agencies and the Government of Anambra State, ably led by Chief Willie Obiano, will aid a quick resolution of the immediate concerns at Ifite-Ogwari and other flashpoint localities known to the relevant authorities.

'I implore our hosts and landlords in the East to continue to accommodate us and others, just as I ask that easterners be allowed to ply their trades across Nigeria without let,' Siddiki said.

He said the publication did not spare the Anambra State Government, as, according to him, it struggled to rope it in as an accomplice in the spurious conspiracy to cause trouble in the community and cause disharmony between the people of the community and Fulani herdsmen.

Siddiki said, 'While one recognises the futility in engaging in bitter exchanges with people in whose locality one plies one's legitimate trade (cattle rearing in this case), and where one seeks a conducive business environment, therefore, it is only proper that one cautiously responds to these diatribes and put a lie to the falsehood and bitterness the said publication harbours.

'Fulani herders have been known to rear their livestock in Ayamelum Local Council where Ifite-Ogwari belongs. Recently however, our people started noticing a kind of resentment that informed the refusal of the locals to sell some items, even sachet water, to the herders. The leadership of the herders under the auspices of Miyetti Allah Cattle Breeders' Association of Nigeria, South East Zone, intervened by engaging the leadership of the Council in an effort to renewing a harmonious relationship between the herders and their landlords. The hard negotiations were still on when we heard the news of Ifite-Ogwari people attacking herders, killing four and leading to the loss of 108 cows. Some herders who sustained various degrees of injuries have been treated,' Siddiki said.

He said the development was duly reported to the police who waded in to ensure that the sense of insecurity did not escalate. He said that the police, having taken charge in the course of duty, made arrests and were carrying out their obligations of law keeping, independent of Miyetti's passions.

'It is therefore strange to see a group arrogate such influence as commissioning the police to do its bid to Miyetti. We cannot, and have no reason to interfere in police work. I want to reiterate the advocacy of Miyetti that criminals should not be spared, whosoever they may be. This is a mantra I have not ceased to profess and support. Crime and insecurity are detrimental to the business of herding. We therefore detest them and fully support their eradication. These malaises are harder on herders who are itinerants and therefore vulnerable.

'There cannot be any denying the fact that criminals could be and are often found amongst herders. We have always encouraged the authorities to apprehend such persons and subject them to the demands of the law. It is indeed the urge to help the authorities in tracking down such bad eggs in the fields of our business that Miyetti continues to engage the authorities for the necessary statutory mandate to collaborate with governments in screening and endorsing Miyetti franchised herders across the country. This will surely help in taming the fields out there,' he said.

Siddiki however regretted that while his people had shown a huge sense of commitment to the subsisting compensation terms drawn up by the committee constituted by the governor's authority, they had seen no reciprocation in compensation of losses they had incurred, both human and livestock.

'The records of the compensations we have paid are there, just as those of our many losses for which compensations are eagerly awaited are readily available,' Siddiki said.