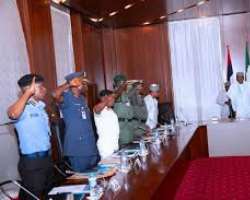 The Northern Youth Coalition has tasked the Nigerian media to be responsible in her reportage of security issues in the interest of national security.

The youth at a solidarity rally in support of the Nigeria security agencies fighting insurgency explained that the media has for too long concentrated in reporting perceived lapses rather than the successes recorded in the fight against insurgency.

Speaking to journalists in Kaduna on behalf of the conveners of the coalition, Mallam Ibrahim Usman and Comrade Sani Bala, both urged the media to highlight the gains made by the security agencies rather than hyping the destruction caused by insurgents adding that such reports tends to give impetus to the criminals and demoralise the troops.

"We have observed with dismay the continued hyping of activities of insurgents without corresponding reports of successes of our troops. As a people who have studied the situations since when the insurgency started to date, we are worried that the media has not reported adequately the gains achieved by our security forces.

"We know for a fact, the calls for the sacking of security chiefs is fuelled by the negative reports. As patriots, it behooves on us to put the records straight and urged the media to be more patriotic in the discharge of its duties.

"It is a global standard that you do not change a winning team in the middle of the game. The Nigeria Service Chiefs have performed creditably to the admiration of many who have done proper appraisal of their activities. The Nigerian Army and Air force in particular have witnessed unprecedented transformation in their operations, training, and welfare of its personnel amongst other things under this dispensation more than any other time.

"Today, issues of bombings in public places and other security breaches orchestrated by the Book Haram insurgents have been halted or reduced to the bearest minimum. That is why over 50 groups have gathered here today under the umbrella of Northern Youth Coalition to support our security agencies.

The group further urged the Federal Government to disregard calls for the sack of service chiefs saying such calls were either made out of share ignorance or mischief but rather keep fate with the security agencies in their resolve to winning the war.

"We call on the Army in particular to remain steadfast in her onslaught on criminals across the country. The Army must must sustain its gallantry within the rules of engagement and never to allows criminals frustrate the successes recorded so far.

"Also, it is the responsibility of all citizens to ensure that there is security of lives and property. To this end, we appeal to all Nigerians to show solidarity with our security forces and not try to dampen the morale of the troops particularly when the enemy attacks but encourage the troops to go for the jugular" the group added.