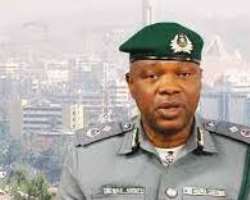 He has also been posted to become the Commandant, Nigeria Customs Command and Staff College, Gwagwalada, Abuja.

Adeniyi’s promotion came barely two weeks after the command effected the seizure of $8.07 million at the E-Wing of the international airport tarmac.

Briefing newsmen following the seizure in Lagos, the Comptroller-General of Customs, Hameed Ali, said the MMIA Command was able to intercept the cash sealed in 20 wraps in six bags through credible information gathered on the day the consignment was supposed to be moved out of the country.

Ali, who commended Adeniyi and his team for their due diligence, said that their act of patriotism is an indication of a reformed Customs whose operatives are increasingly putting national interest above self.

Adeniyi assumed duty as the first Area Controller of the Murtala Muhammed International Airport command in July 2019 following the restructuring of eight additional commands that were created out of the existing ones to enhance administrative convenience and boost revenue generation.

Prior to his appointment at the Airport command, Adeniyi was the Deputy Commandant of the Nigeria Customs Command and Staff College, Gwagwalada in Abuja. He had also served creditably well as the National Public Relations Officer of the NCS for several years.

Meanwhile, Comptroller M. Maaji, has been appointed to take over as the new Area Controller of the airport command.