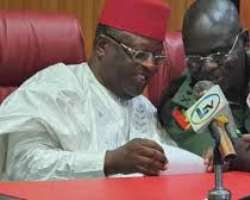 Ebonyi State Governor and Chairman, South east Governor's Forum, Chief David Umahi has called on the Chief of Army staff, Lt. Gen. T.Y. Brutai to downsize the number of roadblocks in the South east and create an army unit in the region.

The Governor who made the call while paying courtesy visit to the Chief of army staff, Lt.Gen. T.Y. Brutal at the defence headquarters, Abuja urged the army to legitimately acquire her land at Amasiri in Ebonyi state.

He said the need to downsize the roadblock in the region has become necessary in a way to give their people comfort since it will be difficult to talk of dismantling all the roadblocks.

Chief Umahi reminded the army boss of the land in Amasiri in Ebonyi state which he said was designated for the military but regretted that the land has not been formerly acquired.

He urged the Chief of army staff to indicate if the army is still interested in the land to enable them start the process of acquisition or rather get a new place for the army.

The governor further requested for an army unit inform of Forwarding Operation Base in the south east to strengthen and beef up the security in the zone and promised as a government to build the infrastructure that Will house the Base.

"I came for three things, you have a land in Amasiri in Afikpo North LGA in Ebonyi State that is designated to be yours but that is by the words of mouth. The indigenous people took us to court and we came to find out that the land was not properly acquired.

"If you love that land so much, then we can start the process of acquisition or we can acquire a brand new place formerly.

"We are requesting to have an army unit inform of Forwarding Operation Base in the Southeast. This is to strengthen the security of the zone, we promise as a government to build the infrastructure even though we have the infrastructure that they can start with even if they come tomorrow while we take time to build a very good place for them.

"Finally, the compo ration is being launched in Abakaliki in the Barrack, the MOU has been signed, it is a very laudable venture of the Army and security agencies. So, I plead that we look into it, maybe we can take a tour of the barrack so that you can commission the road network I built for the Army at Abakaliki and we can use the opportunity to see if we can revive that partnership as Ebonyi State Government is willing", he submitted.

Reacting, the Chief of Army Staff, Gen. Buratai thanked the Governor for his visit, noting that he always remember the Army.

Immediately after the meeting with Chief of Army Staff, the Governor proceeded for a meeting with IGP, Mohammed Adamu where he requested for the creation of additional mobile Squadron in Ebonyi State.