Anambra 2021: The Turn Of The People Of Anambra South To Produce The Next Gov Is Not Negotiable 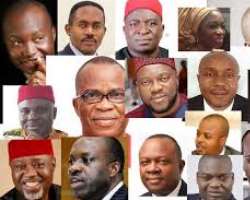 Onitsha, Eastern Nigeria, Feb 24, 2020-The turn of the People Of Anambra South Senatorial District comprising Old Aguata, Ihiala and Nnewi zones, to produce the next elected Gov of the State is totally non negotiable. This is clearly hinged on the principle of power shift or rotation powered by equity and fairness. In the Anambra South, too, equity and fairness shall determine which particular zone: Old Aguata or Nnewi or Ihiala zone shall take the turn of producing the next Gov.

The above was the position of Int’l Society for Civil Liberties & Rule of Law-INTERSOCIETY contained in a statement issued today and signed by Barr Chinwe Umeche, Head of Democracy & Good Governance Department. To achieve the above, money politics, squander-mania, mediocrity and daftness must give way for skillfulness or intellectual and leadership capacity, leadership charisma and commitment to render selfless service to mankind and society if elected into public office, Intersociety added.

“It must be pointed out clearly and boldly that any attempt to deny the People of Anambra South their right to produce the next Governor of Anambra State in Nov 2021 is capable of making the State ungovernable including resurrecting and drawing the wrath of the Old Aguata Political Mafia”, Emeka Umeagbalasi said today in a separate statement signed by him. “This must be pursued and fought by the People of Anambra South with vehemence, vigor and tenacity”, Umeagbalasi further said.

Background
Anambra State created in August 1991 with 21 LGAs, is one of the 36 Component Units or States (plus the Federal Capital Territory) of the Federal Republic of Nigeria. The State, among others, embraced the return to civil rule in late May 1999 and had been governed legally and constitutionally since then as well as by ‘doctrine of necessity’ for purpose of avoiding anarchic leadership vacuum.

The above position of ours strongly stems from renewed interests by some politicians from zones other than Anambra South to contest for the seat of Anambra Gov in 2021. The camp of Dr Chris Ngige, a current Federal Minister and former default Governor of the State is said to have recently told the media that ‘pressure is being mounted on him to return as Anambra Governor in 2021’. Dr. Chris Nigige is from the same Anambra Central that consecutively governed the State both legitimately and by default for eleven years.

Another former Gov from the same Senatorial District, Mr. Peter Obi, though highly respected and accomplished achiever in public office was also copiously quoted in the media recently as declaring that ‘zoning or governorship rotation in Anambra State is dead or abolished’; meaning that henceforth the seat is thrown open. For us at Intersociety and going by sampling opinions from majority of the People of Anambra South, the views of Dr. Chris Ngige and Mr. Peter Obi, if truly expressed, are strictly personal. Such views or interests, if true, are totally rejected because they strongly go against the principles of equity and fairness.

The People of Anambra South are hereby called upon to rise in strong defense of their right to takeover democratically and govern the State come 17thMarch 2022. Intersociety is strongly against political domination, exclusion and segregation of any type in any area, space and time. It is not only that the gubernatorial seat of the State shall be shifted to the Anambra South, but it must also be conceded to the Political Zone by consensus.

The shift in the Anambra Governorship seat must also include denominational shift. A situation whereby the Catholic Church has consecutively produced the Governor of the State for the past nineteen (19) years or from 29th May 2003 to 17thMarch 2022 is denominationally dictatorial and unfair. It is time for members of the Pentecostal and Anglican churches or even traditional religions to be given a chance. To ensure this, the Catholic Bishops and the Laity should join hands with others in search of a moderate and charismatic non Catholic as the next Gov of Anambra State.

Concurring, Emeka Umeagbalasi added in his separate statement: “I was born a strong Catholic and live till date as a strong Catholic; had my baptism, holy communion, confirmation and holy matrimony all in the Catholic Church; but in terms of governance of Anambra State, my respected Church, the Catholic, shall step aside, having taken enough shots at the seat of Anambra Governor in the past nineteen (19) years. My respected Mother Church must therefore allow others a chance, except whereby they do not have anybody or unwilling or unable to produce or field a good and acceptable candidate”.

Signed: Intersociety per Barr Chinwe Umeche & Emeka Umeagbalasi (for himself)