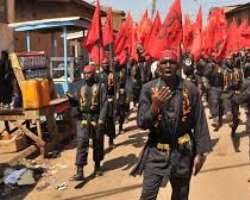 A Kaduna State High Court has discharged and acquitted 91 members of the Islamic Movement in Nigeria, also known as Shiites.

Justice Hajaratu Gwada acquitted the defendants of the charges filed against them by the Kaduna State Government on Friday.

The IMN members were arrested during a confrontation with the convoy of the Chief of Army Staff, Lieutenant General Tukur Buratai in Zaria, Kaduna State in December 2015.

During their trial, the defence counsel had filed a no-case submission before the court on the grounds that his clients were innocent.

He also stressed that the state government had failed to prove its allegations against them beyond a reasonable doubt.

Giving her judgement, Justice Gwada struck out all the charges filed against the IMN members and acquitted them.

She held that the decision was as a result of the failure of the prosecution to prove the allegations levelled against the defendants beyond reasonable doubt.

But the state government has rejected the judgment.

A statement by the Attorney General and Commissioner of Justice, Aisha Dikko, lamented that “after calling 36 witnesses and tendering 106 exhibits, the prosecution is surprised that the court concluded that a legally admissible case had not been made.

“The state is dissatisfied with the ruling of the court which is, in our view, erroneous in law, perverse and cannot be supported, having regards to the evidence led before the court by the prosecution.

“As such, the state will be lodging an appeal at the Court of Appeal, Kaduna, as soon as the full text of the ruling of the high court and other records are compiled.

“The case in Charge Number KDH/KAD/40C/2016 began as a fallout of the events that began in Zaria from 12th December 2015, when members of a now proscribed group attempted to prevent the convoy of the Chief of Army Staff from passing through a public highway.

“After the clashes, 90 of those arrested at the scene were handed over to the police. At the conclusion of investigations, a five-count charge of Criminal Conspiracy, Culpable Homicide, Unlawful Assembly, Disturbance of Public Peace and Wrongful Restraint, under Sections 97, 221, 102, 106 and 256 of the Penal Code, was preferred against them. The matter was assigned to Hon. Justice H.T.D Gwadah of the Kaduna State High Court for trial.

“A total of 36 witnesses were called by the prosecuting counsel from the office of the Attorney General and Commissioner for Justice of Kaduna State. Witnesses included senior military officers who were with the Chief of Army Staff at the scene of the crime, senior police officers, a consultant pathologist, ballisticians and victims of the crime.’’

“In the same vein, 106 exhibits were tendered by the prosecution during the trial. At the close of the prosecution case, the defence team made a no case submission, arguing that the prosecution had not made out a case to warrant the accused persons to defend themselves.

“It is a matter of utmost surprise that in its ruling today, 21st February 2020, the court held that the evidence the prosecution led is not legally admissible and discharged the defendants.

“This is notwithstanding the fact that Senior Military Officers and Senior Police Officers testified, and that exhibits were tendered and legally admitted by the court. Obeisance to the rule of law compels us to challenge this conclusion at the Court of Appeal.”